SilverSneakers member Kathleen Mitchell knows: If you keep an open mind, inspiration will find you. 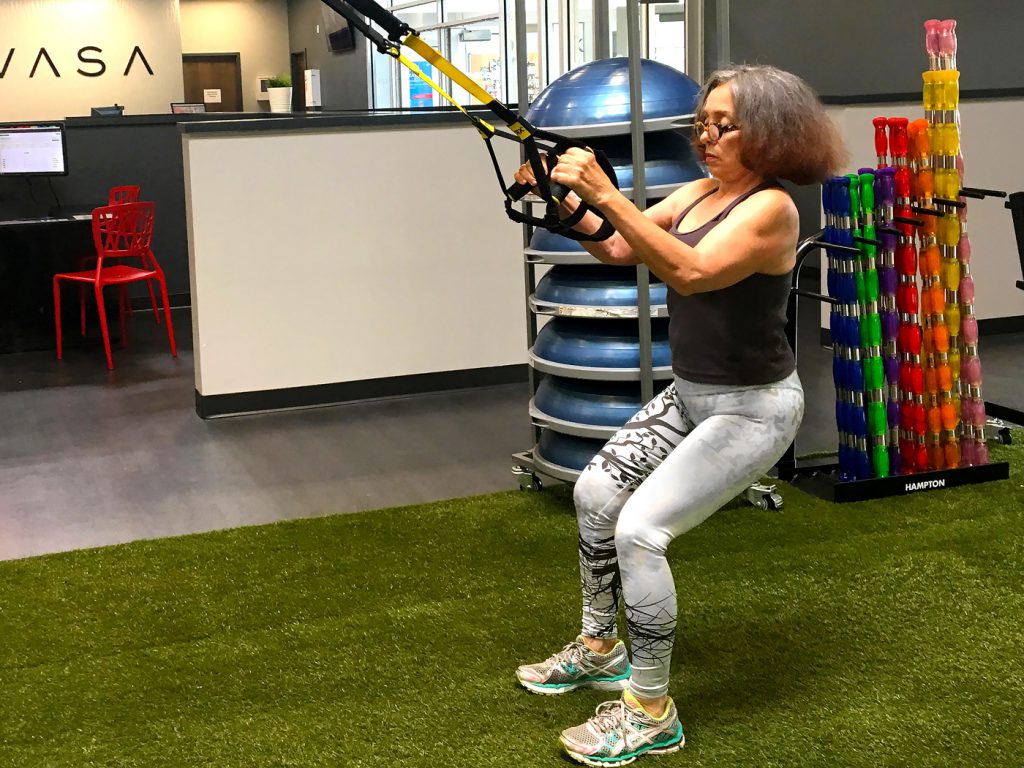 Most people try to keep a low profile at the gym: get in, work out, and get out. Not 74-year-old Kathleen Mitchell.

“I don’t feel uncomfortable wearing anything,” she says. “I dress as bizarre as I can. People come up to me all the time and say, ‘Oh my God, you look great!’ And you know what? They never say that when you wear ordinary clothes.”

Kathleen’s personal trainer and partner in crime is a bit more blunt about her wardrobe. “Kathleen’s gym clothes are totally impractical, but who gives a s—?” says Debbie McHugh. “She wears them with confidence, and she looks awesome. She’s a frickin’ riot!”

If for some reason VASA members don’t know Kathleen for her head-turning attire, then they definitely know her as one-half of the gym’s most surprising dynamic duo. Kathleen and Debbie—family friends for 15 years, workout buddies for a few months—push each other to go harder, faster, and stronger every day, in and out of the weight room. “We both teach each other so much,” Debbie says.

Kathleen never expected to forge such an important fitness relationship at this age, at this stage. But then again, she was never much for expectations in the first place, preferring instead to follow her muses wherever they took her.

Here’s how “the 74-year-old spitfire,” as Debbie calls her, ended up transforming her health—and how you can too.

Ask Kathleen what she used to do for a living, and she’ll tell you about her list. “I wrote all my jobs down somewhere, and I wish I had that piece of paper now,” she says. Not content to stick with one career for life, Kathleen has tried on practically every profession for size, or at least enough to warrant keeping a record of them so she won’t forget.

She’s been a flight attendant, a dress buyer, and a real estate agent. Now she dabbles as a silversmith. She’s lived everywhere from New York to Niagara Falls, but her journey to a better body, mind, and soul began somewhere in Arizona, sometime before the turn of the century.

Back then, Kathleen fled to the Southwest to escape a toxic relationship she had ended in Niagara. She was already divorced from her first husband and the father of her only son, Zac, and now she was cutting ties with a man who drove her to an unhealthy romantic obsession. She sought solace 2,000 miles away—but the Arizona splendor just made her sadder.

“There was all this beautiful scenery around me, and the only thing I could do was sob,” Kathleen says. “I’d wake up in the middle of the night crying. I’d even go to the gym and start crying!”

At the same time she was fighting depression, she was also battling bulimia. She’d exercise like crazy to maintain a perfect figure, and eat “rich, gooey, sugary foods,” only to throw them up. Add alcohol into the mix, and you get a snapshot of Kathleen’s rock bottom. The perfect storm led to an epiphany: “I looked at myself and said, ‘This is not what I want to do with my life.’ So I decided to cut out all my bad habits.”

That meant eating better, exercising without going overboard, and finding a new job—“one where I could do something healthy,” Kathleen says—in a new state. That’s how she ended up at the Florida College of Natural Health (now Cortiva Institute), where she studied massage therapy, practiced the trade, and rebooted her lifestyle in the Sunshine State.

Then it was time for another change of pace. In 2006, Kathleen moved to Denver at her son’s suggestion. That’s where her ex-husband lived, and they remained great friends. (The exes are so chummy, in fact, that they share a house together; she’s been caring for him while he recovers from prostate cancer.) She took up work in a salon downtown and enjoyed the latest stop in her life for the next 12 years.

Still, something was missing—she just didn’t know what. Like clockwork, that’s when Debbie came to Denver.

Step 2: Feed Off Your Friends

Debbie had met Kathleen’s son, Zac, more than two decades ago. The two hit it off while studying abroad in Europe and became fast friends. It was Zac who convinced Debbie to move to New York City to launch her career in media. Zac, meanwhile, ended up in Los Angeles as a set designer. Whenever Debbie would travel to Denver, she’d make it a point to meet up with her best pal’s mom. And when she found herself with an unexpected stretch of free time earlier this year, she left New York and crashed in Kathleen’s basement.

Kathleen confided in her new roomie that she’d been in something of a fitness slump. While she still occasionally exercised, she lacked motivation to make it to the gym on a regular basis. Now that Debbie—a weekend warrior and longtime fitness magazine and book editor—was in town, Kathleen wanted a knowledgeable, willing workout partner who could keep her accountable.

Debbie was more than happy to oblige. Turns out she was in the midst of a big career transition and had also let her fitness slide due to the stress. So Debbie set out to devise a joint workout plan that the two could tackle together.

“I wanted to work out with Debbie because she’s really fabulous with training,” Kathleen says. “And exactly what I wanted to happen, well, happened. All of a sudden we were working out six days per week.”

Ever since April, Debbie and Kathleen begin each gym day with a 20-minute cardio warmup, then complete circuits featuring all kinds of strength moves. Debbie pays close attention to her partner’s predilections; when she noticed Kathleen enjoyed TRX equipment, for example, she began incorporating more bands into their workouts. Then they’ll wrap up with a 10-minute massage. “It’s our little reward,” Kathleen says. 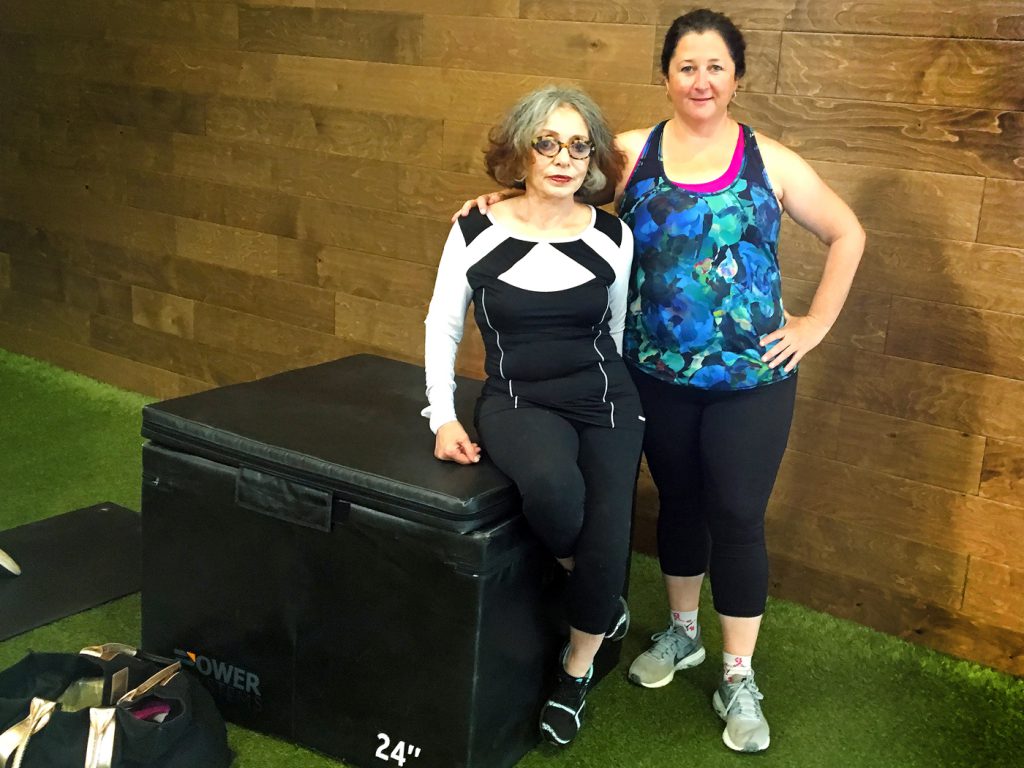 At first, some of the exercises were a struggle, Kathleen says. “My tendency was to say, ‘No, I can’t do that.’ But I didn’t. I persevered. And now I can get through anything Debbie gives me. That’s what makes me most proud.”

The results have been real. “Not only is Kathleen’s balance noticeably better,” says Debbie, “but we can do the exact same strength workouts. I just use slightly heavier weights. And quite honestly, I hate to say it, but she’s better at pushups than me.”

For all the rewards Kathleen has already reaped from their partnership, Debbie says the benefits are mutual. “It feels so satisfying to see her get stronger and know I’m the one helping her get stronger,” she says. “And at the same time, she helps me be accountable and stay competitive. She makes me want to have as much energy as she has when I’m 74.”

But Debbie’s appreciation for her friend runs even deeper than that. “My mom has advanced Alzheimer’s disease, and I can’t really interact with her,” she says. “Kathleen has filled that void for me. She tells me how much she loves and appreciates me. It’s amazing how, on a basic human level, I need to hear that. Kathleen has given me that unconditional mother love.”

Debbie won’t live in Kathleen’s basement forever. She’s in the process of permanently moving to Denver and finding her own place. But both women expect their bond to grow even more powerful now that they’re in the same city.

“I want her to be as healthy as possible, for as long as possible,” says Debbie, “and I’ll keep putting together challenging workouts to help her get there.”

As for Kathleen, she says she has plans to start a blog—with Debbie’s input, of course. She wants to use it to spread advice to fellow seniors. “I’d love to inspire other people to embrace their age, instead of feeling that they have to be old and sick,” Kathleen says. “When you exercise, you look and feel better, no matter how old you are. And when you look and feel better, you’re going to be way ahead of the game.”