SilverSneakers member Ron Marinella learned how to evade sarcopenia, and then wrote the book on it. Steal his strategies to stay strong and healthy for life. 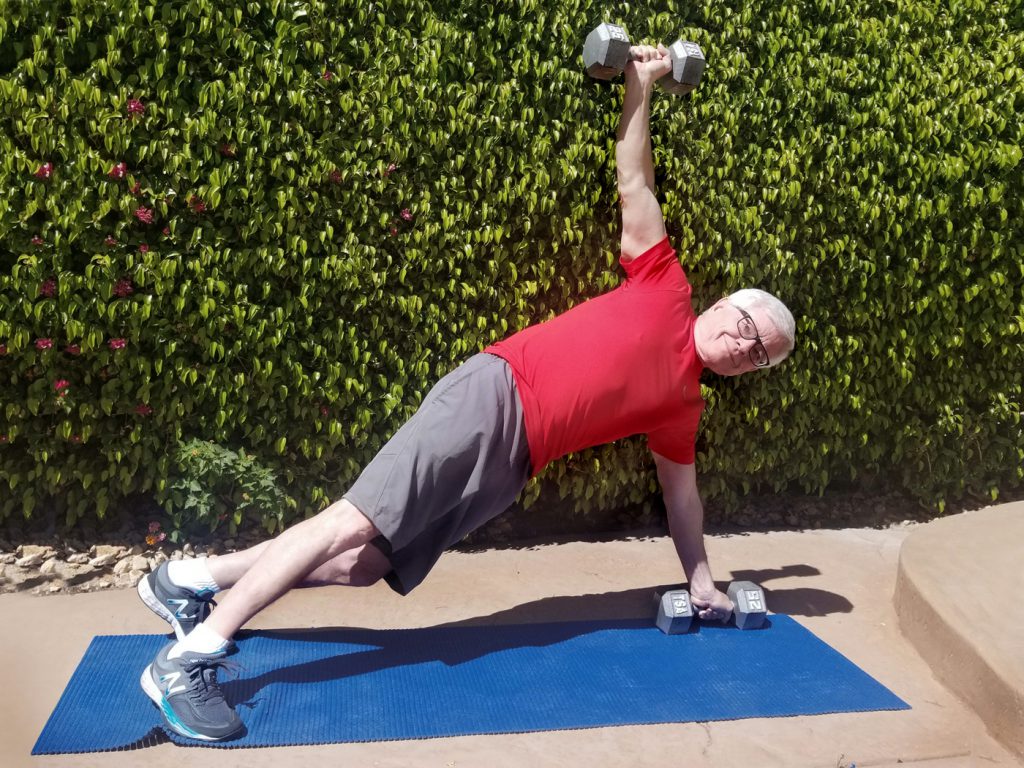 Not that he isn’t used to professional success. For decades, he climbed the ranks in the technology and management consulting industry, eventually ascending to the highest executive spots in several organizations before retiring.

It’s just that Ron, 71, doesn’t consider himself much of an author—at least not one with a formal writing background. So when he self-published his first and only book, Finishing Strong! Strength Training for Old(er) Guys, earlier this year, he was pleasantly surprised to see it land at number one in Amazon’s Men’s Health category just days after its release.

Sure, it was a nice personal achievement, Ron says. But what matters most to the Rancho Mirage, California, resident is that people seem to care deeply about the subject that compelled him to pen 250+ pages in the first place: sarcopenia, or the natural loss of muscle due to aging.

“The older we get, the more our muscles deteriorate,” he says. “But I want to show seniors that it’s not too late to fight back. I want to get as many people as possible back in the gym.”

Here’s how Ron went from a weekend warrior to a fitness fanatic and voice for fellow seniors who want to keep their bodies strong and healthy for life.

Step #1: Embrace Every Opportunity to Sweat

Ron hardly has a decorated athletic history. He’ll be the first to tell you that he was “average at best” in the sports he played while growing up in Steubenville, Ohio, including football, basketball, and baseball. “I sat on the bench a lot,” he jokes.

But that didn’t stop him from suiting up any chance he got. When he joined the U.S. Air Force after graduation, he played competitive soccer with his fellow airmen. When he moved to the St. Louis suburbs to start building his career, he signed up for adult baseball leagues and pitched until his late 30s. Add tennis and running into the mix, and “there was never a time when I wasn’t doing something fairly active,” he says.

Step #2: If Something’s Not Working, Change It

By the time he and his family moved to southern California in the late 1980s, Ron settled into a routine he’d stick with for the better part of the next three decades: light gym work during the week, and 18 holes on the weekends.

He kicked his golf habit into overdrive once he and his wife, Connie, retired in the mid-2000s, and kept up with the simple weightlifting regimen—some dumbbell curls here, some shoulder presses there—to which he had grown accustomed. “I was in good shape,” he says. “But I wasn’t satisfied.”

That’s because around age 65, Ron started noticing he was losing muscle. “With the work I was doing, I should’ve been maintaining it at the very least, but I wasn’t,” he says. Blame sarcopenia, which affects one in three adults age 60 or older, according to a review published in Age and Ageing. “It bothered me.”

It was time for a fitness update. But first, the study sessions.

Instead of simply accepting sarcopenia, Ron set out to fight off his new foe. Though he says he’s always been a curious person and has diligently tracked his health and fitness for decades—“I’ve entered my nutrition intake and lab tests in Excel spreadsheets since the ’90s,” he says—the topic of losing muscle had previously eluded him. “So I started researching.”

As it happened, Ron had also recently purchased a book, Mark Rippetoe’s Starting Strength, for his 16-year-old grandson, but plowed through the pages while waiting to gift it. He was now armed with more information than ever to change his life. But as he began to document his findings for his own sake, he realized he could also share the research with others in his shoes.

“I wrote one chapter, thinking I’d just show it to my family and friends,” Ron says. “Then I wrote another. And then I thought maybe I could write a couple more. Eventually I decided to just put everything I learned into one book.”

It’s one thing to preach, and another to practice. So Ron started testing new strength exercises in the gym, based on the fitness tips he had picked up from academic studies and Rippetoe’s muscle manual.

He began by flirting with the barbell bench press, which he hadn’t seriously attempted since his high school days. “It was a little intimidating at first,” he says, “but I knew I needed to try something different than my usual dumbbells.”

He loaded 25-pound plates on each side of the bar for a 95-pound press. “The bar didn’t fall on my face,” Ron says, “which told me that maybe I might be able to do this!”

From that first set onward, he added a little bit more weight each time, always making sure to use the correct form and not bite off more than he could chew. Today, he can bench 170 pounds, his bodyweight. 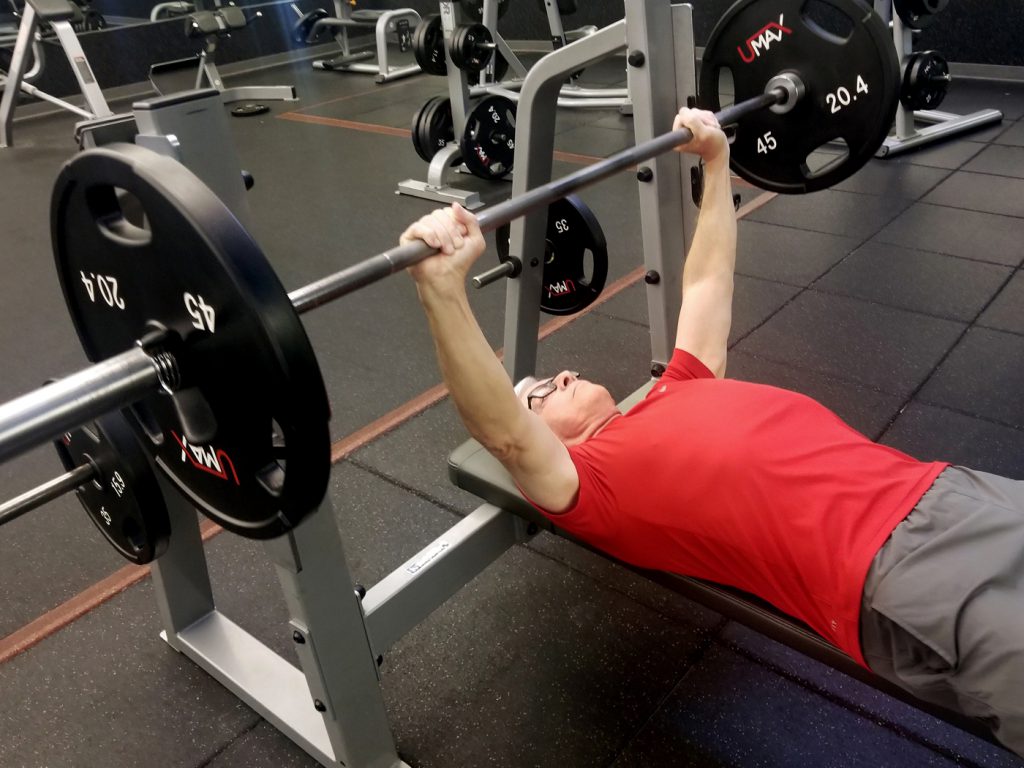 “My only goal was to get stronger,” he says. “I didn’t have any kind of numbers in mind. I just wanted to lift as much as I could in a safe way, and that’s the key: Simplify your goals. This isn’t a race. You’re probably not going to compete in any kind of lifting contest, so there’s no need to put yourself on the sidelines for three months because of a gym injury.”

Ron slow-played his regimen, carefully adding new movements only when he was ready for them. Today, he mixes in a steady diet of his three favorite compound exercises—the bench press, squat, and deadlift—with plenty of cardio and other fat-burning moves for a total-body workout three to four times a week.

If you’re new to these exercises, check out these variations and related exercises:

Ron watched his muscles start disappearing in his 60s, but regardless of when you spot sarcopenia, he says the time is now to get in the gym and take action. “I hope anybody over the age of 50 realizes that it’s essential to do something about rebuilding their muscles,” he says.

He acknowledges the potential hurdles. “You get up there in age, and you’re most likely going to have some kind of health condition,” Ron says. “But my philosophy is you’re going to have even bigger problems if you don’t exercise. So the first step is sitting down and talking with your doctor to see how far you can go.”

The next step? Facing that potential fear of gymtimidation. “Not everyone wants to go to the gym with all those young guys lifting all that weight,” Ron says. “But the truth is they’re nice people. They’re not rude. And they won’t laugh at you. They’re just trying to stay fit like the rest of us.”

For a confidence boost, check out this beginner’s guide to the gym and these tips to overcome common fitness fears.

From there, it’s up to you to use every weapon in your arsenal—whether it’s a resource like SilverSneakers, a personal fitness app, or a book—to reclaim your muscles from aging and build serious, lasting strength, Ron says. “Don’t be afraid to make a change.”