Fifty years after her Olympic gold in figure skating, the 69-year-old is just as motivated to stay active and fit. 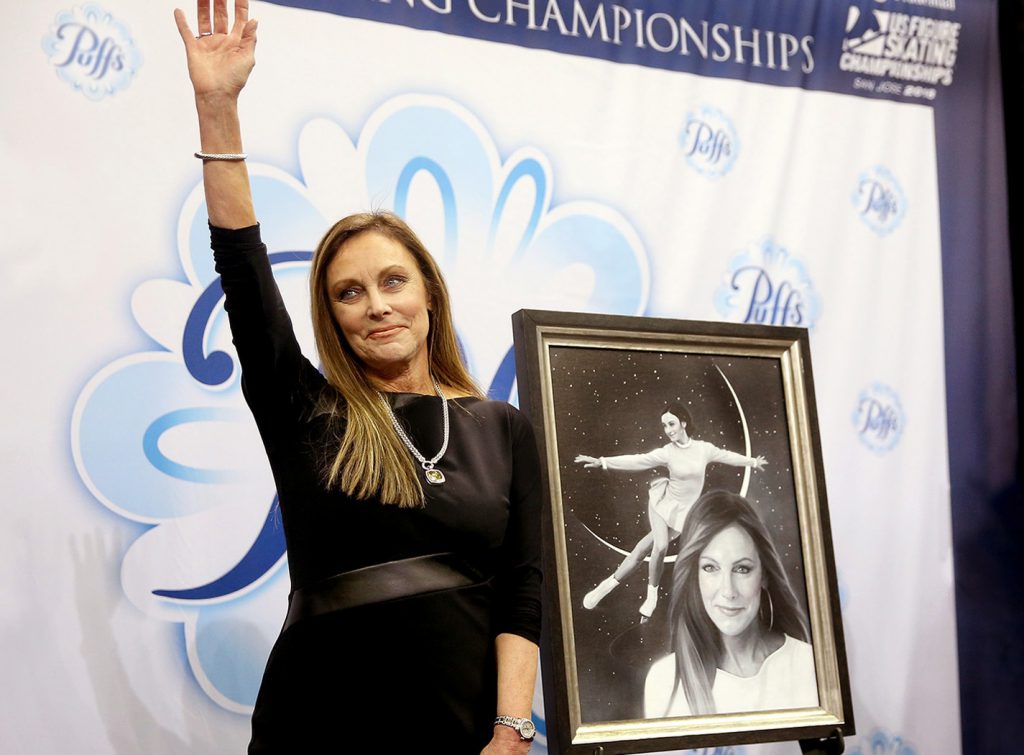 Fifty years ago, Peggy Fleming became an Olympic superstar. At just 19 years old, she captivated audiences with her figure skating routine in Grenoble, France, and became the only U.S. athlete to win a gold medal at the 1968 Winter Olympics. This year, Fleming is taking it a little easier during the Olympics, watching from the comfort of her home in Colorado Springs.

“It’s a lot more convenient when you’re sitting on your couch rather than tromping through the snow and the crowds,” she laughs. “I think I prefer doing the Olympics this way.”

It’s hard to overstate just how significant Fleming’s performance was back in ’68. It was broadcast live on television, the first time such an event was filmed in full color, during “a troubling time in the world, especially for the U.S.,” says Fleming. “All I wanted to do was skate and hopefully do my best, but I became this beacon of hope for our country and the youth of America.”

Her victory came just seven years after a dark day for U.S. figure skating, when the entire U.S. team and Fleming’s own coach had died in a plane crash. (A memorial fund was set up to help rebuild the program, and the 12-year-old Fleming used her share of the money to buy new skates.)

Her green costume was designed by her mother, Doris, inspired by the color of Chartreuse liqueur made by French monks at a nearby monastery. Doris hoped the hue would subliminally excite the local audience and get them cheering for her daughter—and it worked. After winning gold, Fleming and her iconic costume graced the cover of LIFE magazine.

Fleming, who celebrates her 70th birthday this July, still can’t believe it’s been half a century since her Olympic moment. “It goes by in a flash,” she laughs. “It’s really been 50 years? It seriously does feel like yesterday. But I guess everybody feels that way about growing older.”

She and her husband, retired dermatologist Greg Jenkins, moved last year from California—their home for 40 years, where they raised two sons and briefly ran a winery business—back to Colorado, where Fleming began her competitive skating career as a teenager, training at the Broadmoor World Arena.

They moved to be closer to their three grandchildren—one of their sons lives in the Denver area—but it’s also a return to the city where she and Greg first met. They were just dating during the ’68 Olympics, and got married two years later, so coming back to Colorado feels like a return to her roots.

“We live near a private lake, and they have their own Zamboni,” she says with a laugh, referring to the big devices used to clean and smooth ice at professional rinks. “Of all the neighborhoods in all the world that we could’ve moved to, it had to be a place with its own Zamboni. In a weird way, it feels like fate to me.”

Although Fleming hasn’t skated in years, she’s very active and goes to the gym regularly. “I love the feeling you get when your body does what you want it to do because you’ve trained so well,” she says. But she knows how intimidating it can be to walk back into a gym, especially in your senior years.

“The first thing you notice is all the younger people, with their tattoos and big muscles,” she says. “The way they drop their barbells to the ground, and it makes that loud metallic clang! Oh my gosh, why do they do that? It startles me. I just want to go tell them, ‘That’s not very nice. Could you try and drop your weights a little more lightly and carefully? And also, if you’re having such a hard time holding onto them, maybe you’re lifting too much. Stop showing off!’”

Fleming and her husband exercise together, a couple times a week and always with a trainer. “My whole life I had a coach, and I just feel more comfortable with one,” she says. “I need to be pushed. I can’t do it alone. I need somebody there to tell me, ‘Come on, Peggy! Don’t quit now! You can do more!’ Once they get me to a certain level, then I’m like, ‘Okay, I can do this’”

If she didn’t have a trainer, she says, she’d find other people to exercise with. “It’s very motivating to have somebody else next to you,” she says. “It keeps me inspired. It’s the only reason I don’t quit.”

At her gym, she seeks out her friends and always pays attention to their progress. “It really makes a difference,” Fleming says. “It’s like peer pressure, but in a friendlier way. You see your friends and how often they’re coming to the gym and all the progress they’re making, and you’re like, ‘Whoa. I guess I better start coming in more often.’ I like being around people who are better than me. It gives you something to aspire to.”

Fleming’s gym has the Silver Sneakers program, and she calls it “fantastic.” She says: “I love everything about it! These are people from my generation, inspiring each other, pushing each other forward, helping each other get better. It’s a great connection with other people your age, and sometimes even people not your age. It’s such a positive, exciting thing, where you don’t even feel like you’re exercising. Everybody is just having fun.”

Fun, says Fleming, has always been her personal philosophy to fitness. It’s what kept her going as a teenage athlete, when the high stakes at the Olympics would’ve otherwise scared her away. “If it wasn’t fun, I wouldn’t have kept doing it,” she says. “My parents and my coaches were strict, but at the end of the day you have to love what you’re doing and have fun doing it—because otherwise what’s the point?”

It’s also what keeps her going now, when she knows that her days as an elite athlete are long behind her but she’s still determined to push herself and do whatever it takes to feel her best.

If she can’t make it to the gym, Fleming and her husband keep active by playing tennis. “We’ll be out there for two or three hours at a time,” she says. “I’ve met most of the neighborhood that way. I bring our older son, Andy, and his middle son, Trevor, and we all get to play. You don’t even notice that you’re exercising when you’re playing a game.” 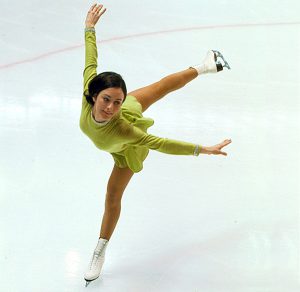 As much as things change, they also stay the same. Fifty years ago, Fleming was an inspiration for “the youth of America,” in her words. She turned Olympic figure skating into a marquee sport and gave a beleaguered nation reason to feel hope. But today, long after the global spotlight has faded, when she’s more than content with her life as a mother and grandmother and wife, she continues to be an inspiration, if on a slightly smaller scale.

“I’ve always had a positive attitude,” she says. “My attitude hasn’t changed in 50 years. I’ve never had thoughts like, ‘Am I kidding myself? I can’t do this! I’m not strong enough to make this happen.’ It’s always been about how I can do this. Whether I’m 19 or 69, I believe that it can be done. I can age well. I can still get to the gym and put on something cute, and feel like I belong in the gym, and move my body till I feel myself standing up straighter again.”

There’s one quote that continues to motivate her, and helps her leave the house and drive to the gym even when she’d rather stay home and not move a muscle: “How old would you be if you didn’t know your real age?” The answer to that question can change depending on how much effort you want to put in, she says.

“Your age doesn’t matter,” Fleming insists. “All that matters is how you feel. If you’re not feeling especially good right now, that could change with just a little bit of exercise. Your body starts moving and your heart starts pumping, and suddenly your body forgets what it was complaining about.”

Ask yourself again how old you feel after even a half-hour at the gym, Fleming says, “and you might be shocked by how much the number goes down.”