Research shows that cognitive performance declines during winter and early spring. Adopt these simple strategies to stay sharper than ever, no matter the season. 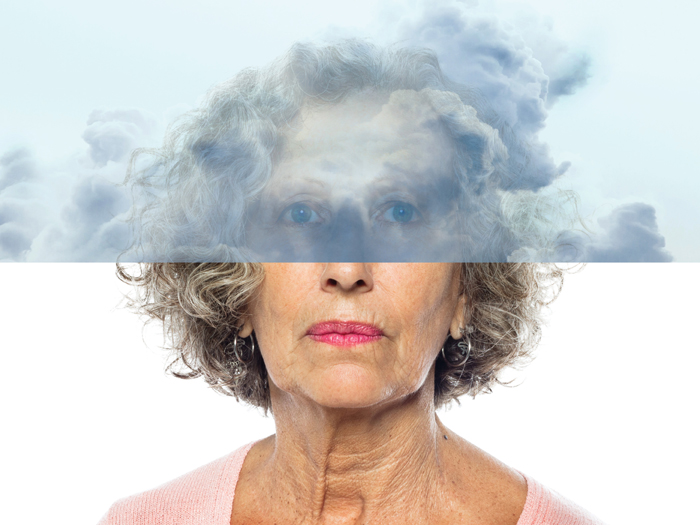 It’s no secret that most people feel like hibernating in the winter, but new research reveals your memory may actually go into hiding during the colder months.

A 2018 study from Columbia University found memory and concentration peak in the late summer months for adults in their 70s, 80s, and 90s, including those with Alzheimer’s disease.

But sweater weather doesn’t have to be synonymous with slower cognition. Here are seven ways you can help yourself beat brain fog and stay sharp in every season.

A consistent, scheduled routine is the best way to achieve your exercise goals. But what about your cognitive fitness? Do you apply the same concept? Probably not.

“Often, people squeeze in a few chapters of a book randomly, perhaps while they’re on the train or waiting for an appointment,” says Gregory Jicha, M.D., Ph.D., an associate director at the University of Kentucky Alzheimer’s Disease Center.

And the more you do it, the better. An hour per day of these activities was better than 30 minutes per day. And 30 minutes trumped 10 minutes.

“Not many people would think of origami as a classical brain intervention,” Dr. Jicha says. “This study shows it really doesn’t matter exactly what your cognitive activity is. What matters is you set aside structured time and focused attention. Regimenting your brain fitness with intent, meaning, and effort is an excellent way to keep your mind sharp.”

Whether you like reading, want to try your hand at origami, or pick up a new hobby, set aside time to cultivate your mind.

Brain Booster #2: Get Your Daily Greens

All vegetables come with plenty of health perks. But to protect cognitive function, seek out foods with rich plant pigment, such as kale, broccoli, and spinach, recommends Steven Masley, M.D., author of The Better Brain Solution.

“Research shows if you eat just one cup of green vegetables per day, your brain is 11 years younger than someone who doesn’t eat them,” Dr. Masley says.

Sneak a serving of spinach into a protein-packed breakfast smoothie. Or make a delicious three-ingredient dinner with chicken, chickpeas, and a bed of mixed greens or kale.

Our brains are composed of nearly 60 percent fat. That being the case, it should come as no surprise that our brains need fat to work correctly. But the majority of Americans don’t get enough of the good unsaturated fats found in foods like nuts, olive oil, avocados, and salmon, Dr. Masley says.

One easy way to fit in more healthy fats: Add salmon to your weekly dinner rotation.

Salmon is a top source of omega-3 fatty acids, making it a powerful food for staving off brain fog, says Cyrus Raji, M.D., Ph.D, an assistant professor of radiology at Washington University in Saint Louis.

In fact, eating baked or broiled salmon once per week is correlated to larger brain volumes and protection from Alzheimer’s disease, he says.

Not a fan of fish? Other good sources of fat include whole, unprocessed foods in healthy portions:

Not all carbs are created equal. Some can help you, and others can hurt you, Dr. Masley says. And refined carbohydrates—which include sugar and highly processed grains devoid of nutrients, like white flour—fall into the latter category.

Refined carbs generally have a high glycemic index (GI), meaning your body digests them quickly, which causes a spike in blood sugar.

And when a food is made up of a lot of carbs, it can have a high glycemic load (GL). This refers to how much a food raises your blood sugar levels, based on the amount of carbs in that food.

High-GI and high-GL foods have been found to impair brain function. In fact, research has shown a single meal with a high glycemic load can impair memory.

“If you were to do a scan of your brain after a high glycemic load, it looks quiet—like a Christmas tree without the lights on,” Dr. Masley says.

Another study looked at older adults ages 70 to 89 who consumed more than 58 percent of their daily calories in the form of carbohydrates. The researchers found they had almost double the risk of mild mental impairment or dementia, compared with those who had more protein and fat in their diet.

This doesn’t mean you need to eliminate carbs altogether. Simply be mindful of the type of carbohydrates you’re eating. Choose high-fiber carbs that are minimally processed: vegetables, fruits, legumes, and whole grains. Luckily, these carbs can also help you lose weight.

Brain Booster #5: Commit to Finally Finding a Workout You Enjoy

After analyzing the lifestyle habits and brain scans of nearly 900 older adults, Dr. Raji and his team of researchers found regular physical activity—any kind of activity—may cut the risk of Alzheimer’s disease by up to 50 percent.

“We discovered even leisurely activities like walking and gardening can correlate to larger brain volume in the areas responsible for memory,” he says.

The most important thing is to choose activities you actually enjoy. You’ll be much more likely to sustain them.

“It’s never too late to start,” Dr. Raji says. “My research subjects were older adults with an average age of 78. The fact that their brains could experience positive effects from lifestyle changes shows the brain is pretty plastic, even in older age.”

Explore your options, including walking, dancing, swimming, or SilverSneakers classes. You can also rotate a handful of workouts to prevent boredom.

A cognoscopy describes a group of tests—including blood tests, genetic tests, an online cognitive screening, and more—that can reveal your personal risk for cognitive decline. The term was coined by Dale Bredesen, M.D., author of The End of Alzheimer’s: The First Program to Prevent and Reverse Cognitive Decline.

“For anyone over 45, it’s a great idea to get a cognoscopy so you can understand what factors are most important to target for years of optimal cognition,” he says. “Left unaddressed, these are the very factors that collude to produce Alzheimer’s disease, so it’s best to identify them early.”

Exactly what a cognoscopy entails may differ depending on your health. Talk to your doctor if you’re interested in learning more about screening options and costs.

Dr. Bredesen also stresses the importance of speaking to your doctor if you experience any symptoms of memory loss or difficulty with organizing, calculating, speaking, or recognizing faces. “Please do not wait,” he says. “The earlier these are treated, the better your chance for a positive outcome.”

Check out our guide on the early warning signs of Alzheimer’s disease to learn what’s normal and when to talk to your doctor.

Rosemary has long been linked to memory. People even used to wrap the so-called remembrance herb around their heads, Dr. Masley says.

The jury is still out on whether that had any effect, but recent research on rosemary oil is promising. A team of researchers at Northumbria University gave older adults a memory test in a room infused with rosemary essential oil, lavender essential oil, or no aroma at all.

More research is needed to understand how scents affect memory. It’s also important to know essential oils can be harmful to pets or may not be appropriate for people with certain chronic conditions.

But if you enjoy the scent of rosemary, don’t have pets, and don’t have any chronic conditions, feel free to give it a try—perhaps while reading or practicing a hobby. Look for essential oils and diffusers from reputable stores, and be sure to read the instructions.