You may be unknowingly setting the stage for health problems. How to know when enough sugar is enough. 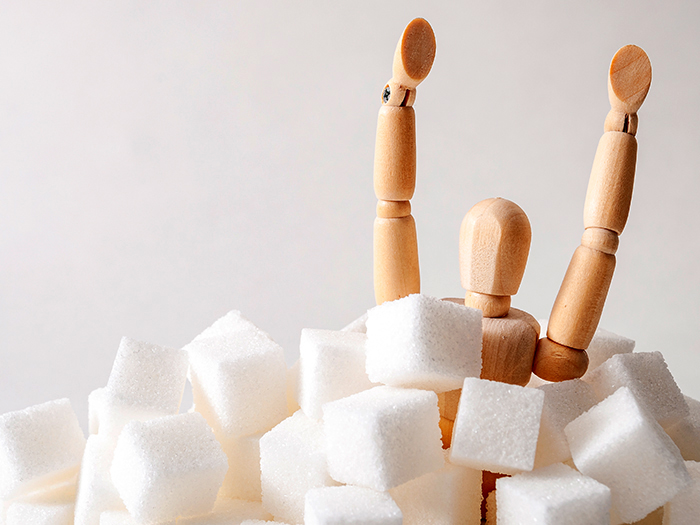 It’s largely this last group of foods that has made sugar nutritional enemy number one. That’s because added sugar adds calories, not nutrients.

But sugar itself isn’t the bad guy. It helps fuel your workouts. It adds flavor and depth to foods. And we all deserve a slice of birthday cake.

Rather, it’s the amount of sugar we’re helping ourselves to that’s the issue. And by all accounts, we’re dipping into the sugar bowl far too often than is healthy for us.

A recent analysis of the typical American diet shows that we’re getting most of our calories—nearly 60 percent—from processed foods that are frequently loaded with added sugars.

“It’s a case of too much of a good thing can be really harmful for your body and your emotions,” says Anne Alexander, author of The Sugar Smart Diet.

So how can you tell if you’re consuming too much sugar? There are some common telltale signs, like gaining weight or getting cavities, but there are also some signs that might surprise you.

Sugar is well known to give you a quick burst of energy, thanks to the carbohydrate calories. That makes a glass of OJ or a granola bar an obvious go-to when you need some oomph to power through a task.

But too much sugar over the course of a day can stop you from falling asleep when your head hits the pillow, says Alexander. The leftover sugar in your system delays the release of melatonin, which is the hormone that controls your sleep-wake cycle.

Caffeinated sugary drinks are especially problematic for insomniacs and light sleepers. A report in Sleep Health found that not sleeping well can make you crave more sweetened lattes, teas, or sodas the next day.

At the same time, too much sugar in the morning or afternoon can also make you nod off in the middle of book club.

That’s because when sugar goes into your bloodstream, insulin is released to help your cells absorb it for energy, says Marilyn Gordon, R.D.N., professor of nutrition at Nova Southeastern University College of Osteopathic Medicine in Florida.

But when you pump too much sugar into your system, your body produces too much insulin. And that’s when the notorious sugar crash—and the tiredness—hits you.

To help with insomnia, “avoid sugary snacks for at least two hours before hitting the sack,” says Alexander.

If you’re tired during the day, Gordon is a big believer in trading an afternoon snack for a mid-day walk or stretching break to perk you back up.

And consider turning in earlier each night. Among the findings of a 2017 study on the connections between sleep and eating patterns, researchers found that people who go to bed after midnight drink up to three more servings of sugary drinks each day than those who go to bed before 11:30 p.m.

“One of the sure signs of eating too much sugar is if you keep finding yourself ravenously hungry shortly after you’ve eaten a snack or meal,” says Alexander.

The cycle usually goes something like this: You’re hungry, grab a bite to eat, and afterward feel energized. Twenty to 30 minutes later, however, you’re absolutely starving.

You could claim a high metabolism, but Alexander and Gordon agree the more likely culprit is your penchant for highly processed foods with too many added sugars.

Sugar is a carb, remember, and carb-heavy meals simply don’t keep you full. Instead, they spike your blood sugar, make it crash, and leave you with the munchies.

Build your meals and snacks around lean protein, healthy fats, and vegetables so that your blood sugar levels stay even, says Gordon.

Protein is especially important, she adds, because it will slowly metabolize and make you feel fuller for longer.

“If you absolutely have to satisfy a sweet craving, have some fresh fruit with the protein,” she says.

Try this: Pair protein-rich yogurt with berries for a sweet yet healthy snack.

A sugar habit can also make it harder for you to stay focused and put a damper on learning new skills. It can even make you more forgetful.

More long-term human studies are needed, but a growing body of research reveals compelling associations between sugary diets and declines in key brain functions, such as working memory, attention, and decision making.

A 2019 study in Clinical Interventions in Aging, for example, found that the more added sugar older individuals consumed, the lower they scored on cognitive tests.

Good news—the toll sugary foods take on some of these key memory skills appears to be reversible, according to a 2017 report in Appetite.

Gordon says it’s absolutely possible to wean yourself off of sugar and retrain your taste buds. Focus first on cutting out sugary drinks. They play a huge role in the daily consumption of added sugars.

A good place to start is with your morning cup of coffee. A splash of vanilla extract or dash of cinnamon are easy swaps. Or check out these other new ways to flavor your coffee without sugar.

If you’re cranky, anxious, or feeling blue, it might be the sugar talking.

Gordon and Alexander explain that the part of the brain associated with processing emotions takes a hit when you say yes to a second slice of pie or slurp down a soda with every meal.

“Your body and brain need some sugar to function,” says Alexander, “but too much damages the cells.”

High sugar intake has even been linked to depression. In analyzing data from the Women’s Health Initiative, researchers determined that high-sugar diets could be a risk factor for depression in postmenopausal women.

That supports the findings of another long-term study that looked at the diets and moods of more than 23,000 Londoners. Those with the highest sugar intake were 23 percent more likely to be diagnosed with depression than those with the lowest sugar intakes.

If you’re experiencing feelings of extreme sadness or anxiety, it’s important to talk to your doctor or mental health professional. There are many effective treatments that can help you feel better.

Do some detective work and figure out how much sugar you’re really eating in a day. New FDA rules for nutrition labels require many foods to call out the added sugars on the nutrition facts panel.

But another good way to spot them is to look at the ingredients list. The higher up you see things like brown sugar, corn syrup, honey, and so on, the more added sugar is in the food.

Next, look for easy places to scale back. Your goal? No more than 10 percent of your daily calories should come from added sugars.