The sweet stuff carries big risks—especially as you get older. 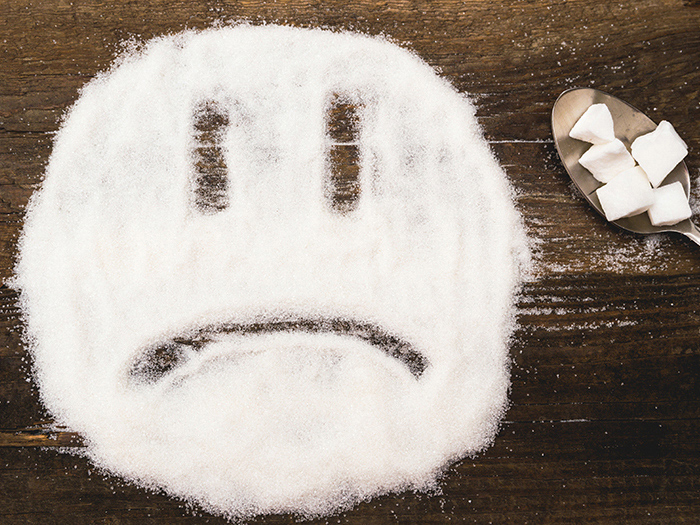 Experts may debate tea detoxes and the keto diet forever, but five out of five nutritionists agree: We’re all better off limiting added sugar.

Added sugar also increases your risk of developing a laundry list of serious health problems, he says. The list includes being overweight and related conditions like heart disease, type 2 diabetes, and certain cancers. It also includes chronic inflammation, which can make arthritis and joint pain worse.

So, what exactly is added sugar, and why is it so bad? Here’s how to spot it and four reasons it’s dangerous to your health.

Before you start throwing out any fruit in your kitchen, it’s important to understand the difference between natural and added sugar.

This is sugar that occurs naturally in fruit, such as fructose, and milk, such as lactose. These foods provide vitamins and minerals to keep the body strong and help prevent disease. Plus, natural sugars are usually paired with fiber and protein, which help keep you full.

As with other healthy foods, you want to stick to proper portions. Too much of anything—including fruit with natural sugar—can lead to weight gain.

This is sugar that has been added to foods or drinks, either by you or a manufacturer. Table sugar and brown sugar are examples, but it also has many aliases on the ingredients list: agave, corn syrup, honey, molasses, and so on.

A simpler way to spot added sugar is to know its two main sources.

Sugary drinks make up a whopping 47 percent—almost half—of all added sugar consumed in the United States, according to the 2015 Dietary Guidelines for Americans. This group includes soda, sweetened coffee and tea, fruit drinks that are not 100 percent fruit juice, and sports and energy drinks.

Danger #1: Its Calories Are Useless

Unlike natural sugar that comes in wholesome foods, added sugar arrives empty-handed. It has plenty of calories—but no nutritional benefit in the form of vitamins, minerals, protein, or healthy fats. In other words, it’s the definition of “empty calories.”

How much should we get? The American Heart Association (AHA) recommends limiting added sugar each day to:

How much do we get? The average American shovels down 17 teaspoons every day, according to the 2015 Dietary Guidelines for Americans. That’s about 68 grams or 270 calories.

For perspective, 12 ounces of Coke has 39 grams of sugar—that’s more than what the AHA recommends for both men and women.

Danger #2: Its Harmful Effects Get Worse with Age

You can thank your metabolism for that.

After age 30, your metabolism starts to slow down, Myers says. By your 60s, you may be less active throughout the day and thus need fewer calories than you did previously.

Now, imagine you have decreased your calorie intake to account for a slowing metabolism and less physical activity—but you have a soda or sweet habit that you can’t quit. If you consume the same amount of added sugar as you did before, that means it’s taking up a bigger percentage of the calories you have to spend overall.

In other words, Myers says, when you eat a lot of foods with added sugar, that leaves less room in your diet for foods with more nutritional value. And any excess calories you eat can be stored in your body as fat, which can lead to weight gain and type 2 diabetes.

If you have diabetes or notice any of these signs of diabetes, talk to your doctor about steps you can take to protect your health. The sooner you act, the more you can do to reverse symptoms of diabetes and avoid serious complications.

Here’s something your cardiologist wants you to know: A sugar-laden diet may increase your risk of dying from heart disease.

One JAMA Internal Medicine study, for example, found people who consumed 21 percent or more of their daily calories from added sugar were more than twice as likely to die from heart disease than those who kept it to less than 10 percent.

That was true regardless of the person’s weight, physical activity, or—here’s the kicker—the number of vegetables and other healthy foods they ate.

In another study, researchers from the University of California, San Francisco, estimated that if Americans as a whole cut added sugar consumption by 20 percent, cases of heart disease, type 2 diabetes, and other metabolism-related conditions would drop.

Here’s what else your cardiologist wants you to know: Heart disease is often a silent disease—meaning it’s possible to have it and not even know it. It’s smart to talk to your doctor if you notice any warning signs of heart disease. It’s even smarter to ask about your risk factors, even if you feel healthy.

Added sugar is great for providing quick energy because it requires minimal digestion to be absorbed and used for fuel in the body. The bad news: This surge of energy burns out quickly—and is typically followed by a crash of energy.

“You’re increasing the likelihood of excess calorie consumption, and the development of obesity and its host of potential comorbidities,” he says.

On the other hand, if you snack on an apple, you avoid this crash because the fructose in fruit is accompanied by fiber. And when fiber is digested, the gut sends a signal to your brain to stop eating.

Ready to slash your sugar intake? These six simple ways to eat less sugar are a good place to start.