This SilverSneakers member’s story will get you off the couch—and doing a little dance. 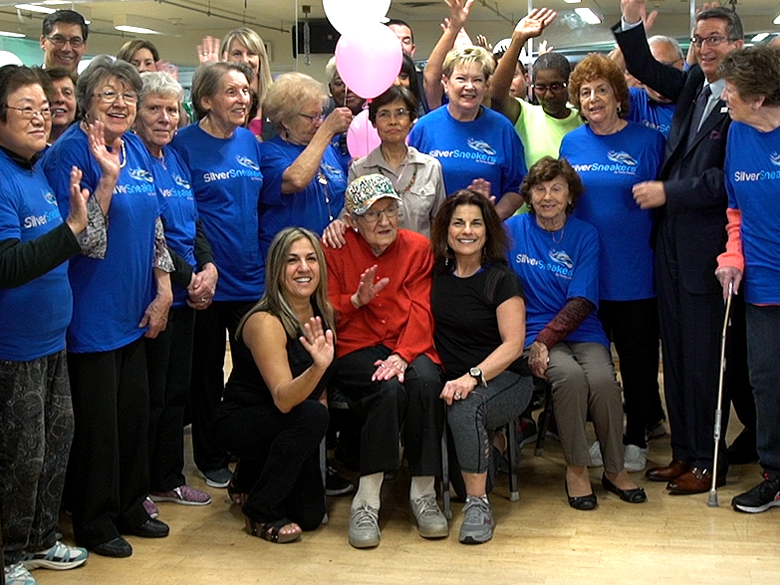 If you’ve ever thought “I’m too old for that,” allow us to introduce you to Nan Smith. The Long Island resident joined SilverSneakers at age 89—and she’s still going strong 14 years later. Nan celebrated her 103rd birthday on April 26, 2017.

Twice a week, Nan heads to New York Sports Clubs (NYSC) in Garden City, New York, to take the SilverSneakers Classic class. The class itself keeps her active, but it’s also helped her forge connections with people who keep her laughing. “Everyone here is so friendly, and they welcomed me with open arms,” she says. “SilverSneakers is my life.”

Susanne Hiller, a SilverSneakers program advisor and fitness instructor at NYSC, met Nan 10 years ago, and they quickly bonded. “She immediately struck me as a doer,” says Hiller, who notes that Nan worked as a nurse for decades, then continued to stay busy after retirement by doing volunteer work in the community. Nan told Hiller that she initially found out about SilverSneakers thanks to a letter from her insurance company—but she was skeptical at first.

“She was 89 at the time, and she told me that she was afraid the people in the class might be too old for her!” Hiller says. “But she decided to check it out, then declared, ‘Oh, it’s not so bad! They’re not all old!’”

Now, at 103, Nan is certainly the oldest in the class chronologically speaking, but she makes friends with people of all ages, including recent retirees in their 60s and 70s. “On the first Monday of every month, right after class, Nan and a group of them go to a local restaurant and have lunch together,” Hiller says. There are at least eight regulars, though sometimes as many as 15 or 20 people join in on the meal.

The Perfect Workout: Shimmy, Then Sweat

Before rewarding themselves with some Italian food, Nan and her classmates follow Hiller’s lead as she takes them through a warmup and stretching. Although it’s not typically part of the Classic class, Hiller always works a little dancing into the warmup because Nan insists that she can “still wiggle with the best of them!”

Nan’s signature move is the shimmy. “She always sits immediately to my right, and when it’s time to get up and dance, she’ll tell me that she needs to turn around because her eyesight isn’t great,” Hiller says. “Then she’ll address the whole group and say, ‘Okay everybody, we need to shimmy together, but I want to watch you watching me!’ And we all laugh and laugh.”

After the dance break, the group works with handheld weights, resistance bands, and a ball that they use to improve eye-hand coordination. The session wraps up with a cooldown and meditation.

Overcoming Adversity with Fitness and Friends

Humor and gratitude are the “essence of Nan,” Hiller says, which is especially impressive considering her life has been far from easy. When she was younger, Nan worked six and sometimes seven days per week to ensure that one of her daughters, who had special needs, could receive the best care. She also saved up to help pay for her other daughter’s college tuition.

Nan lost her husband when she was in her 70s, so she’s been on her own for decades. And just a few years ago, her daughter with special needs passed away.

Nan says that keeping active and making new friends has been key to her thriving in the face of such adversity. “When I first found out about SilverSneakers, I was surprised that my insurance company provided a free gym membership,” she says. “I never remembered to send them a thank-you note; maybe I’m losing manners. But today I say thank you twice over. The program has helped me overcome a lot.”

A Healthy Inspiration for Us All

Today, Nan is an advocate of exercise, urging younger folks and even children to get moving. “Playing piano or violin is good, but exercise is much better,” she says.

Whether being active is directly responsible for Nan’s longevity is hard to say, but research certainly supports the connection between staying active—and social—and living a longer life. Meanwhile, Nan is proud to be a healthy role model.

“Nan has inspired every one of us, and continues to inspire us,” Hiller says. “If she can stay active at 103, why not you?”