But don’t call him an athlete. Fitness enthusiast is closer, he says, but the moniker doesn’t begin to describe his motivation.

To understand that, you have to go back to 2013. Lonnie was sitting in his doctor’s office when he heard the words that would change his life: “You have diabetes.”

Since that moment, fitness has changed—and perhaps even saved—his life.

Today, he’s not only a SilverSneakers member, but he also performs on stage in ballroom dance showcases. Plus, he’s shed 30 pounds and manages his diabetes without medication.

Impressed? Many other people were too! In recognition of his longtime commitment to staying active—and for inspiring others to move more as well—Lonnie was voted the 2019 SilverSneakers Swanson Award Winner.

The annual award honors a member who isn’t just dedicated to improving his or her own personal health, but actively emboldens others to do the same.

Keep reading to learn more about Lonnie’s journey and lessons he’s learned along the way. We guarantee he’ll inspire you to be more active, no matter your age or stage of life.

When he was young, Lonnie was never much of a fitness buff. He remembers barely being able to pass the Navy’s physical fitness test when he enlisted after high school in 1968.

“We had 18 minutes to complete a 1.5-mile walk-run,” recalls Lonnie, who lives in Greensboro, North Carolina, with his wife of 46 years, Bonita. “I finished in just over 17 minutes, but by the end, I was so out of breath.”

In 1975, five years after he returned home from active duty, Lonnie enlisted in the Navy Reserve, where he served another 19 years. He also had a long career working in information technology at North Carolina A&T State University, earning his degree while on the job.

The Navy taught Lonnie the importance of regular exercise. As busy as he was with work, service, and family life with three children, he did walk occasionally. He eventually picked up the pace and started running with a group of friends.

Fast forward to 1998. At the age of 50, he ran his first marathon: the popular Marine Corps Marathon. He’d go on to complete four more marathons in later years. 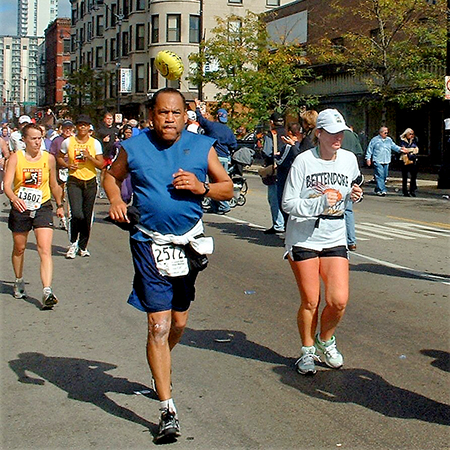 Lonnie discovered another athletic passion by accident, when his young sons made their case for martial arts lessons. As Lonnie watched the class, he decided to abandon the waiting room and join in.

His sons lost interest after 10 months—but Lonnie kept going for 10 years. After earning his black belt, he mentored and helped others earn their belts.

Lonnie’s Lesson #2: A Wakeup Call Is an Opportunity for Change

As time went on, Lonnie tried hard to stay active. But arthritis in his knee and other health issues made it tougher to break a good sweat.

That changed in 2013 when he went in for a physical. His doctor told him that his A1C test, which measures blood sugar, was very high. It was a sign that he had diabetes.

“He also told me that if I lost weight and ate right, I wouldn’t have to go on medication,” Lonnie says. “That was a big motivator for me to start exercising more.”

He started going for long walks, focused on healthy eating, and lost 30 pounds in the process.

The healthy eating part has been a bit trickier than the fitness component, he admits. “I had to cut back on portions and skip my late-night snacks,” he says with a chuckle.

Thanks to his workouts and new eating habits, he’s been able to manage his diabetes without medication ever since.

Since that health scare, Lonnie has added even more activities to his fitness routine. He convinced his wife to try ballroom dancing, and today, they perform in Fred Astaire showcases around their area.

Even though he’s no newbie to the spotlight, he still gets nervous on stage.

“If I mess up, I just tell myself to keep smiling and no one will notice,” he says. “Everyone’s watching your face, not your feet!”

Funny enough, ballroom dancing also helped him discover SilverSneakers. At one of his dance classes, he met the owner of a local gym within walking distance of his house.

“I saw her wearing a SilverSneakers shirt to class, asked her about it, and decided to try it,” he says. 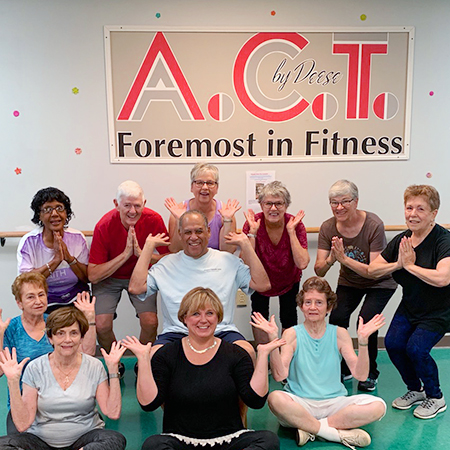 Now, he’s been going to SilverSneakers classes at A.C.T. by Deese for the past five years. He especially likes yoga and stretching in classes. During all those years of running miles and miles at a time, he would never do a post-workout stretch!

“That was a mistake I made,” he says. “Now with SilverSneakers, I have a chance to stretch twice a week for 30 to 45 minutes.”

In addition to dancing and SilverSneakers, Lonnie has kept up his long walks, even when he’s on family vacation.

“When we take cruises, I still go to the gym on the ship, or if we’re at the beach, I’ll take a long walk on the beach,” he says. “If I don’t exercise, I start to feel bad.”

“My grandkids know that when grandpa gets up, anyone can go with me,” he says. “I try to tell them the importance of exercise.”

Lonnie loves healthy living, and for good reason. It’s empowered him to control a chronic condition, while keeping up an active lifestyle in retirement.

While he wants to motivate others to do the same, he doesn’t want people to feel like they have to work out long and hard every day.

“Try to exercise at least three times a week, for 30 to 45 minutes, and eat right,” he suggests. “It’ll help keep you healthy, which is what you want when you’re still young at heart!”

SilverSneakers also provides encouragement for Lonnie. “The group aspect and camaraderie keep me accountable,” he says. “We see the same people every day, we all have the same goals, and we motivate one another.”