You have to move your body, says SilverSneakers member and Christmas aficionado Mary Holcomb. But you also have to keep your soul nourished. 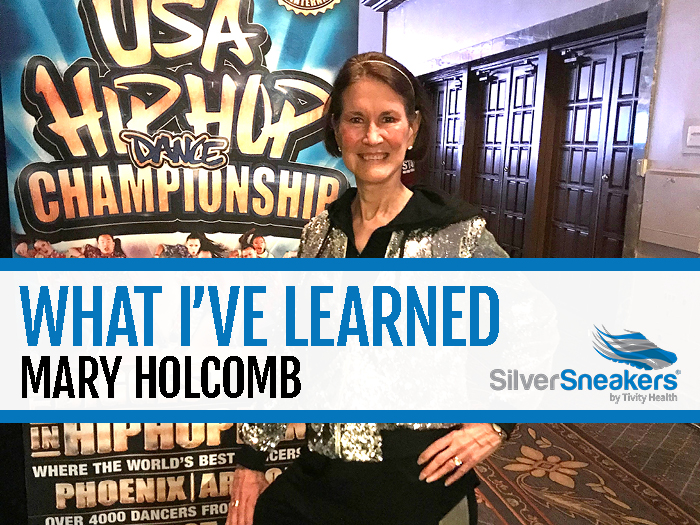 In late November, Mary Holcomb welcomed a contractor into her spacious home in Rome, Georgia. The repairman was there to tend to some windows that needed replacing, but he couldn’t stop staring at Mary’s wall-to-wall holiday decorations. “Wow,” the man said. “When did you start decorating for Christmas?”

Mary laughed before answering the familiar question. “In 1994,” she replied. “I just never took anything down.”

Twenty-four years ago, Mary and Jim Holcomb built their 11,000-square-foot dream home and immediately began filling every inch of it with Christmas relics. Step inside and you’ll be taken aback, just like the contractor, by the stunning, almost surreal array of festive adornments. There are more than 50 full-size silk Christmas trees, 1,000 Santa Clauses, hundreds of nativity sets, and a slew of nutcracker soldiers, for starters. 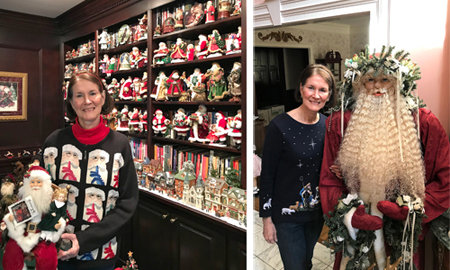 The fact that she resides in a year-round Christmas mansion is emblematic of the way Mary has always lived her life: going big. In her 65 years, Mary has been an award-winning math teacher, an equally decorated realtor, a professional ballerina, and in a unique but not-at-all surprising recent twist, an in-demand hip-hop dancer who regularly performs for crowds of 20,000 strong.

“I’m not going to sit down,” she says, defiantly. “I want to stay moving.”

In short, Mary Holcomb is one of the most interesting SilverSneakers members you’ll ever meet. If you don’t jump out of bed every morning to attack life, she has three pieces of advice for you.

Mary would be a lifelong resident of Rome, 70 miles north of Atlanta, if it weren’t for the six weeks she spent in Chattanooga as a baby before her family moved to town. Still, she’s always known how things go in Rome.

“Here, when you turn three, you start taking dance lessons,” Mary says. So that’s what she did.

She instantly excelled at ballet and tap, so much so that when she was 12, her dance instructor asked her to start teaching other students in exchange for free lessons. While she honed her education chops in her teens, she spent her summers as a ballerina with the Birmingham Civic Ballet. 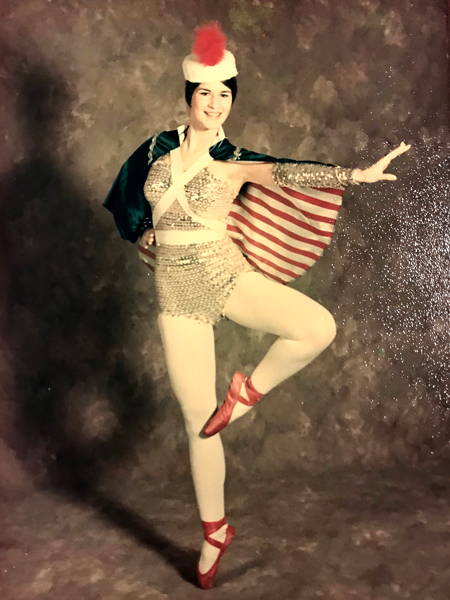 After graduating from Berry College in Mount Berry, Georgia, Mary took over her dance academy and ran it for four years, but she traded in her pointe shoes for pencils when she landed a job as an advanced math teacher with the Rome City School District in 1975. She’s been with the district ever since, and doesn’t plan on retiring anytime soon.

“I just love my students,” Mary says. “I love seeing a light bulb go off in someone’s head after they’ve had a hard time understanding something, and seeing a student who used to be low-achieving get 100 percent on a test,” she says.

Mary’s students love her back. On eight separate occasions, the student in her high school who has scored the highest on the SAT has chosen her as the Student Teacher Achievement Recognition (STAR) Teacher who left the biggest impact on their life.

“Some of them have gone on to become my very best friends,” Mary says.

For 31 years, Mary has also moonlighted as a successful residential realtor, a second career that stemmed from a simple decision. “I loved working with people and looking at houses, so I decided to become an agent,” she says.

Naturally, she’s consistently been one of Rome’s top sellers and a perennial winner of her company’s Realtor of the Year award. “I’m probably the most blessed person on the face of the earth.”

Even with both roles, Mary always made sure to make time for dancing. In fact, when she and Jim built their house, they carved out space for a full-fledged dance studio so she could continue to practice her craft.

Of course, Mary’s studio may be the least impressive room in the magnificent Holcomb house.

Mary has been a collector almost as long as she’s been a dancer.

“It’s the hunt that I love,” she says. She started by saving every doll her parents ever bought her, from the Patti Playpal she lugged around as a toddler to Mattel’s original Barbie dolls. “Eventually,” Mary says, “it got really out of hand.”

When she and Jim moved into their house, they built a 1,500-square-foot museum just for the dolls, “but we outgrew it after the third year,” Mary says. “Now the dolls are all over the house.” 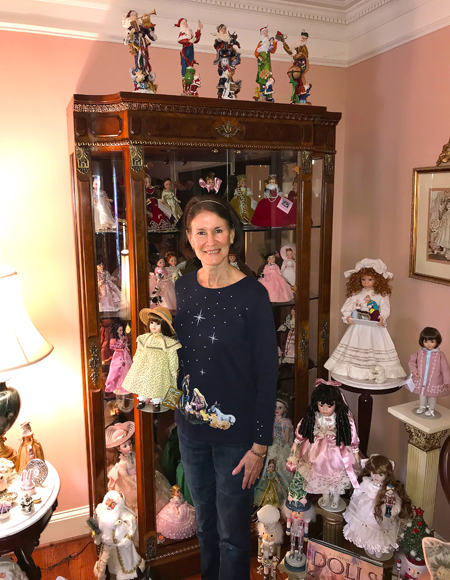 The dolls are elegantly displayed next to Mary’s myriad Christmas treasures, which she began collecting in 1973, the first year Hallmark released ornaments.

In any given room in her house, you’ll find two to six Christmas trees, the largest of which towers nine-and-a-half feet high. Each tree has a distinct theme. The Hallmark tree (pictured below) boasts more than 1,000 ornaments. The movie star tree stands in the home theater. The ballet tree (one of four) rests in the dance studio. The all-white tree with purple ornaments mirrors the all-purple tree with white ornaments. And the Georgia Tech tree moved into her son David’s room when he moved out to attend the university in 2006. 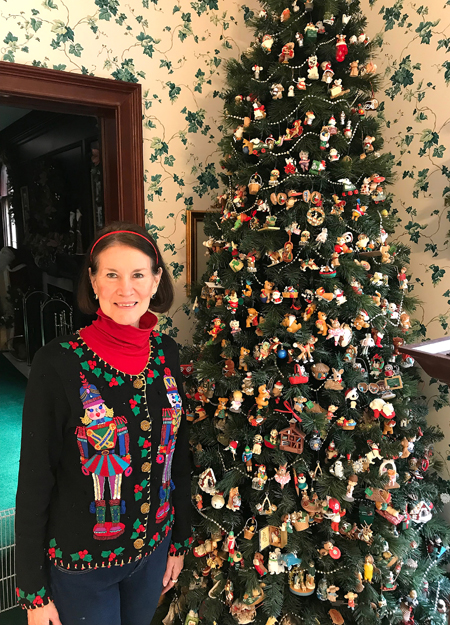 “Every year I tell myself I won’t put up a new tree,” Mary says, “but that’s a lie, because if I see a theme I absolutely love, I guarantee you there’ll be another one. Besides, this is a very large house, and we still have room left.”

Mary and Jim have opened their Instagram-worthy home to curious tourists—it was once a hot stop on an annual city-wide tour—and rented out the space for weddings, banquets, anniversary celebrations, and especially holiday gatherings.

“Everyone wants to have their Christmas parties here,” she says.

But Mary’s love of the holiday runs far deeper than the lavish decorations. Every Christmas, she buys toys, school supplies, and clothing for 100 needy children all over the world through the Samaritan’s Purse international relief organization. “That’s something very near and dear to me,” Mary says.

When Mary isn’t teaching, selling houses, or scouring antique shops for hidden gems, she’s breaking a sweat by moving her body. In 2010, she received a call from choreographer Leslie Alison, a former NBA dancer and captain of the Atlanta Hawks cheerleading squad. Leslie was putting together a hip-hop dance crew of dancers 50 years and older, and she wanted Mary to audition.

“It was a whole new world,” Mary says, but she was ready for the challenge. After nailing her tryout, she became a member of the Silver Classix Crew.

The crew quickly took Atlanta by storm, dancing at Braves and Hawks games. They’ve also participated in international dance competitions, on TV shows like ABC’s “Dance Battle America,” and in music videos for rappers like Migos and Macklemore. Mary, who is in her ninth year as one of four original members, has been part of the action the whole time.

“The adrenaline rush you get when you’re dancing in front of 20,000 people is amazing,” Mary says. “My husband says, ‘There must be something that’s keeping you doing this.’ Well, it’s that rush. It’s a natural high.” 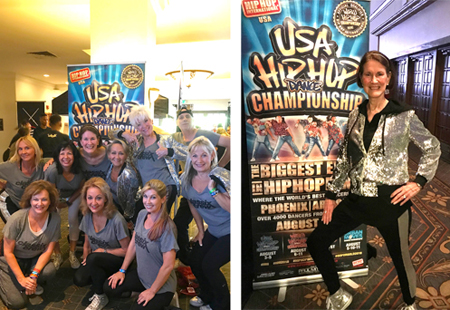 Mary sticks to a grueling practice schedule, driving 90 minutes each way to and from Atlanta to sweat several times per week. But the body and brain benefits make up for the commute.

“It’s highly aerobic,” says Mary of her hip-hop regimen. “Not only does this kind of dance work every muscle in your body, but I actually think it works my mind just as much, because I have to remember all that choreography so fast.”

And if that wasn’t enough, Mary also joins her fit pals in SilverSneakers classes at her local gym whenever she finds the time. “If I don’t have any real estate appointments that day, I’ll head on over to take an aerobics or Zumba class because I’m obsessed with staying in shape,” Mary says.

For Mary, fitness isn’t just a hobby—it’s a necessity. “A lot of people work so hard and expend so much of their time and energy that when they retire, they’re like, ‘Oh, I’m going to sit back and relax now.’ But once you relax, the harder it is to get back up and do something. We don’t think about the atrophy setting in.”

It’s why she’ll never take a break from any of her pursuits, and why she might very well have picked up a new hobby by the time you finish reading this.