The answer depends on what type and how much you’re drinking. Read this before you buy—or brew—another bottle. 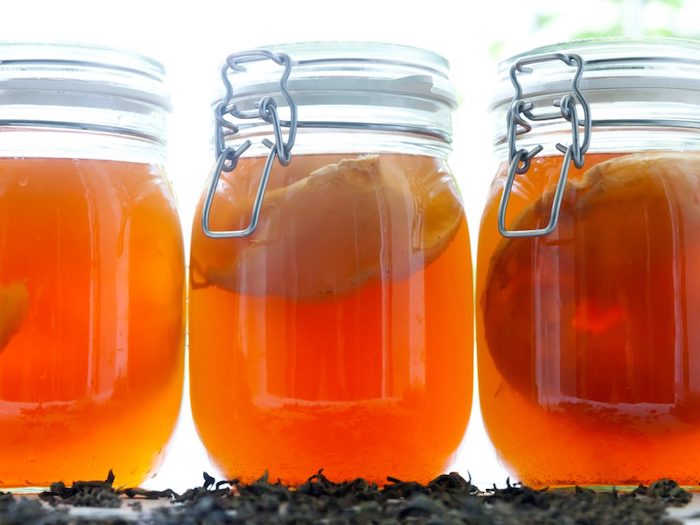 Unless you’ve avoided the grocery store or the news lately, you’ve probably heard of kombucha—a fizzy fermented tea that some people say is great for gut health. But those claims haven’t been well-supported by science, and there are some rare but potential dangers associated with this drink.

Here’s what you should know before you buy or brew another bottle.

Some people brew their own kombucha at home, but you can simply pick up a bottle of commercially made kombucha at your local grocery store or big-box retailer.

Is It Good for You?

Although kombucha is trendy right now, it’s not new. It dates back to 220 B.C., when people in northeast China consumed it for its “detoxifying and energizing properties,” according a report in Comprehensive Reviews in Food Science and Food Safety.

Like other fermented foods—such as kefir, sauerkraut, and miso—kombucha has a good-for-you reputation because it contains probiotics, or the “good” bacteria in your digestive tract, explains Emily Rubin, R.D., a clinical dietitian at Thomas Jefferson University.

Although there is mounting evidence that probiotics, in general, might be good for digestion, “there is no high-quality evidence of beneficial effects from consuming kombucha,” Rubin says.

Part of the issue is that the probiotic content varies among different types of kombucha, which makes it difficult to figure out exactly how the drink might impact your health.

The Centers for Disease Control and Prevention (CDC) issued a warning about kombucha back in 1995. Two women became severely ill after drinking the stuff daily for two months, and one of them died.

Rubin notes that these incidents occurred long before the fermented tea became a healthy staple in stores, and that such reports today are rare.

“The biggest risk is making kombucha at home, as it can ferment for too long,” Rubin explains. “The kombucha can also become contaminated [with dangerous bacteria] if it’s not made in a sterile environment.”

For these reasons, it’s generally safer to buy bottled kombucha than it is to brew it yourself.

When you do head to the store, you’ll notice that some brands are pasteurized and others are not. Pasteurization is safer because it kills off bad bacteria—but it also kills good bacteria in the process. If you’re buying kombucha purely because you like the taste, then a pasteurized option makes sense. If you’re drinking it for the probiotics, then you’ll have to take your chance with an unpasteurized (raw) variety.

Kombucha is generally safe. The Food and Drug Administration has evaluated the manufacturing practices of commercial kombucha and didn’t find pathogens or hygiene problems. That said, if you have any health conditions or a weakened immune system, it may be best to steer clear, according to the CDC.

Another consideration is how much you’re drinking. Kombucha is acidic, and it can become more acidic over time if it continues to ferment, which is mostly a problem with home-brewed kombucha. The CDC cautions against overfermenting and suggests limiting kombucha intake to four ounces per day.

It’s also important to note that kombucha contains trace amount of alcohol and caffeine, so if you’re sensitive to either, you may want to limit your intake or avoid it altogether, Rubin says.

The bottom line: For healthy older adults, drinking a max of four ounces of store-bought kombucha per day is the safest way to enjoy the fizzy drink.