This SilverSneakers member is destroying myths about aging. 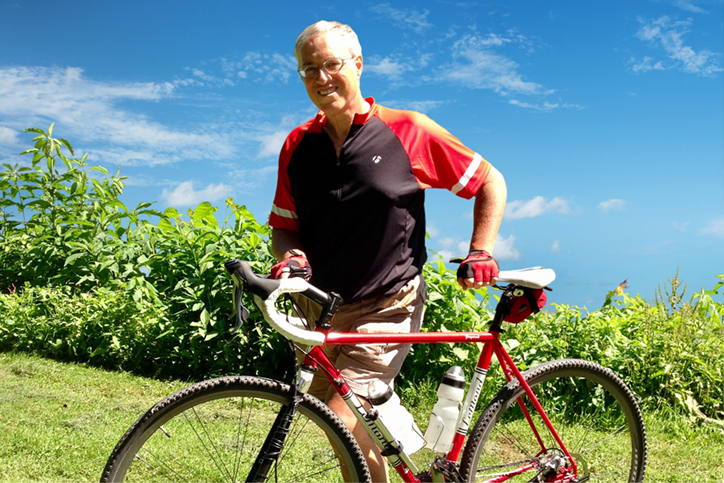 Pittsburgh resident George MacDonald had been an accountant, an IT systems analyst, and a nurse. One thing he’d never been: an avid exerciser. “I hadn’t really done anything to stay fit for decades,” says George, now 66. But when he retired about five years ago, that all changed. He decided that exercise would be his new “job.”

“I don’t debate if I should or if I need to do it. Like going to work, I just do it,” George says. Now he exercises six days per week.

It might seem strange for someone who’d never been interested in fitness to commit to it wholeheartedly in his 60s, but George’s approach made perfect sense to him. He had more free time on his hands, and he was also approaching an age at which many people start to become sicker and frailer. He was determined not to let that happen to him.

“When I was working as a nurse, which was my last real career, I mostly worked in home health care, so I got to see patients who were really sick and couldn’t be helped much by the health care industry,” he says. “I came to realize that many of their conditions were self-inflicted: All kinds of medical problems—heart disease, diabetes, you name it—could be traced back to unhealthy lifestyle choices.”

George recognized that, unlike his patients who had already declined so much, it wasn’t too late for him to make some major changes. “I saw them halfway down a slippery slope, and they had reached a point where they couldn’t get back up. I saw myself at the top of the slope, and I just didn’t want to go down.”

At first, he thought that making a concerted effort to move more around the house by doing chores would be enough to stay healthy and strong. It wasn’t. “A friend gave me a bike, and I tried to ride three miles on it,” he recalls. “By the time I finished, my knees were wobbling, and my head was spinning. That’s what convinced me that I needed a more structured exercise program.”

When it came time to select a Medicare gap coverage plan, George decided to cross off any options that didn’t include the SilverSneakers program. Once his coverage kicked in, he signed up for a local gym right away. “It has just about anything you’d ever want—all the top equipment,” he says. “If I actually had to pay for this gym membership, it would probably cover 80 percent of my Medigap premiums.”

As a newbie, George decided he could benefit from an intro to the equipment and some general pointers, so he signed up for the two free personal training sessions his gym offered. He’s been a regular ever since.

A Typical Week in George’s Workout

George switches up his fitness plan periodically: He sees a trainer once or twice per year for a fitness assessment and will make some tweaks based on the advice he gets. His current routine is to run outside three days a week and visit the gym three days a week. Weather permitting, he prefers to alternate running days and gym days.

At the gym, George largely focuses on strength training, though he likes to warm up on the racquetball or basketball court first. “I don’t necessarily play a game, but I like to get on a court and hit a ball around or shoot some baskets for about 15 to 30 minutes,” he says. After that, he’s ready to hit the weights. He generally uses about 15 different machines that work different muscle groups.

“I’m focusing on overall conditioning,” he says, though he’s especially concerned about keeping his core strong. “I often see older people wobbling along, and that’s due to lack of core strength.”

George’s efforts are paying off. At age 65, he completed his first 5K. Last summer, he ran a 10K called the Pittsburgh Great Race. “I’m planning to do it every year. It will give me something to shoot for, but it also provides a measure of how I’m doing. Last year, I ran it in a little under 58 minutes. We’ll see what happens next time!”

While George isn’t necessarily striving to win medals, he’s proud of his progress. “I’m in better health and better shape now than I was at age 56 or even 46. My goal right now is to see if I can be in better shape at 76 than I am at 66. If I can do it, it will destroy so many myths about aging.”

George’s Top 5 Tips for Getting Started

1. Strive to be the tortoise, not the hare. You can’t expect to see major changes overnight, and it’s normal to feel stiff or weak in the beginning. Start with gentle, aerobic exercise (like walking). Go for progressively longer periods as you become more comfortable.

2. Listen closely to what your body is saying. Take breaks whenever you need them, and don’t push yourself too much until you feel ready. But when your current workout seems a bit too easy, you’ll know it’s time to do more.

3. Focus on quality and quantity. “For a beginner, a little each day is better than a lot every other day or once per week,” George says. That’s important for establishing exercise as a new habit. It also cuts down on the chances that you’ll injure yourself.

4. Don’t obsess about the scale. Not everyone needs to lose weight, and not everyone finds that exercise alone can help them drop pounds. George’s advice: Focus on getting stronger and healthier instead. Weight management will naturally result.

5. Get age-appropriate advice. Consider booking a session or two with a trainer who has experience working with seniors. He or she will be able to give you a workout plan customized to your goals and abilities, and show you how to use the various machines in the gym.

To find a SilverSneakers class near you, check out our location finder. Equipment, amenities, and classes vary by location, so consider taking a tour to find the best fit for you.