There’s no age limit for love and romance—but there are important points to consider before you tie the knot again. 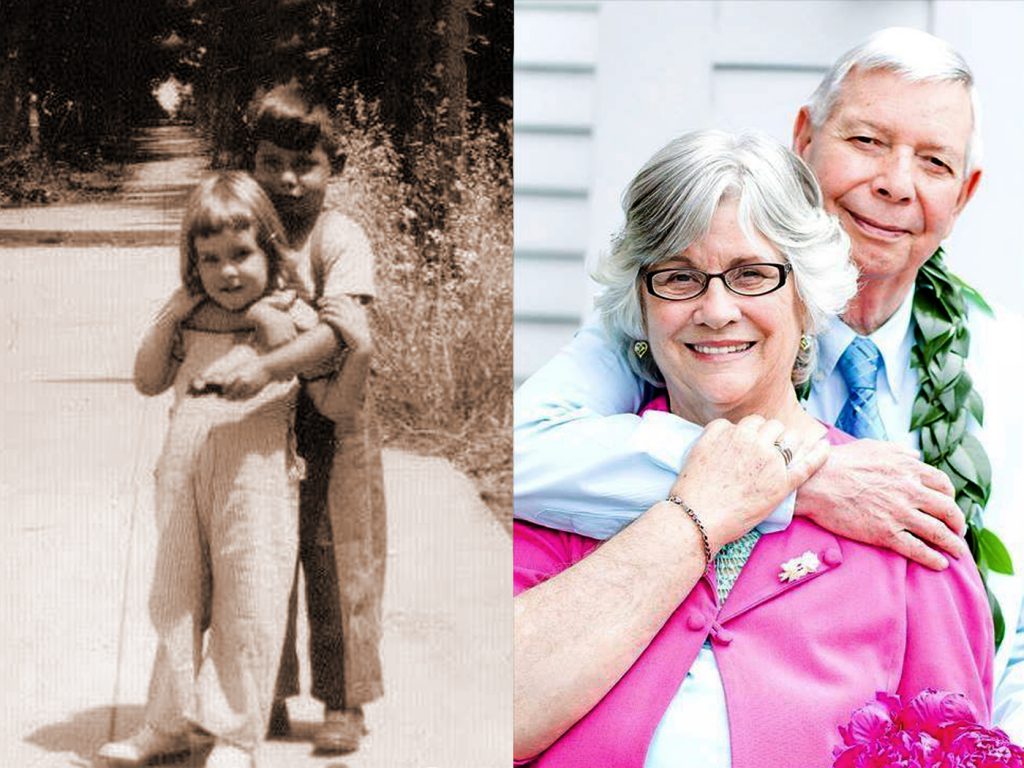 Donna Brechtfeldt and her husband Steven as children and a married couple.

They say love strikes when you least expect it. And for two SilverSneakers community members, that proved 100 percent true.

Field Boatwright, 77, swore she’d never get married again after losing her husband of 44 years. Donna Brechtfeldt, 74, felt the same way: After losing her spouse, she led a busy life and was content being single in her 60s. But both women ended up falling in love and marrying a second time—and they couldn’t be happier.

Donna’s love story started when she was only 10 months old and first met her now-husband. “During WWII, my mother couldn’t afford to feed me, so I lived with Steven’s family for about a year and a half,” she recalls. They became like brother and sister and then were each other’s first loves. However, after high school, Donna and Steven moved to different cities and lost touch.

In 2008, thanks to Facebook, the pair reconnected. After many emails, phone calls, and tears of joy, Donna relocated from California to Oregon, where Steven was living. “It was as though we were never apart all those decades,” she says. A year and a half later, when they were both in their 70s, they were married. Donna says she immediately fell in love with her husband, even though it felt different from her previous marriage. “Maybe because we already knew each other before, but the love is different,” she says. “At our age, there are no expectations.”

For Field, it took a lot of prodding from a mutual friend until she finally agreed to meet her now-husband John, who escorted her on a weekend trip in Florida. “We met in October and got married the following August,” she says. “We figured, ‘What are we waiting for?’”

It’s been a “happy, easy marriage,” Field says. Unlike the first time around, both partners have the big life questions figured out: kids, jobs, and finances. She also got lucky: “John’s a terribly easygoing person,” she says. Plus, they share the same interests and values.

The Perks of Partnership

Falling in love at any age is a wonderful experience, but there are some bonus benefits when you’re older. It can bring companionship, encourage you to stay physically active, and add a positive emotional connection into your life, explains Lisa Bahar, a licensed marriage and family therapist in Orange County, California. A new partner also offers new experiences that can provide an antidote to stagnation and loneliness that may occur in later years.

“Older couples are so appreciative of each other and what they bring into each other’s lives,” says Christine Baumgartner, a dating and relationship coach in Mission Viejo, California. They’ve gone through a lot over the years, so they’re also less likely to sweat the small stuff or nitpick each other’s quirks. What’s more, they tend to be more flexible in terms of finances and free time to travel, so they can have a lot of fun together.

More good news: If you’re looking for love, there’s no shortage of ways to meet other older singles these days. Many SilverSneakers community members report meeting a significant other through online dating. Dating websites like Match and eHarmony, as well as some that are specifically suited for older folks, such as Our Time, can be a great way to connect with new people.

“I suggest all my clients try online dating,” says Baumgartner, who met her late husband online when she was in her 50s. She also recommends checking out MeetUp, which introduces you to groups of people in your area with similar interests. Even if you don’t meet your mate, you’re putting yourself out there and finding new friends!

It’s Not All Sunshine and Rainbows

We’re not saying marrying later in life is easy. In Donna’s case, the first year was difficult as she adjusted to living with someone again—especially in the kitchen, she says. She adds that health issues are starting to crop up, which has been the “hardest part.”

Her advice: Don’t rush. As at any age, you should still take time to get to know each other. “Even if you’re in your 60s and time seems short, you still need to spend time with them before you say ‘I do,’” she says. After all, the last thing you want is a divorce in your 70s.

Baumgartner also emphasizes the need to get to know each other well before marriage is even on the table. Although it sounds unromantic, think of each date as an interview, she suggests. Have a list of must-have and can’t-have qualities going into a relationship. Do you want someone who’s religious? Who likes to travel? You’ll also want to get clear on how they feel about finances, the possibility of relocation, and how much time they want to spend with friends or by themselves.

Families are also a tricky touchpoint when it comes to second marriages. Make your reasons for marrying clear to all adult children involved and explain that you’ve settled on a financial agreement, Bahar suggests. You’ll also want to talk about decisions you may have to face together down the road, such as moving to a retirement community and what will happen if health issues arise.

Field says that she and her husband made an agreement that “what’s mine is mine,” and all of their children were aware and accepting of it. She also agreed to move into an active living community when her husband turned 80. Now that the time has come, they made the move and are loving life.

Bahar adds one final point: “Be friends first, and consider whether marriage is really necessary, given the paperwork and legal requirements,” she says. “Like any marriage, take time to know who you’re marrying versus acting out of the fear of being alone or dependent on others.”