What older adults need to know to get the medical care they deserve. 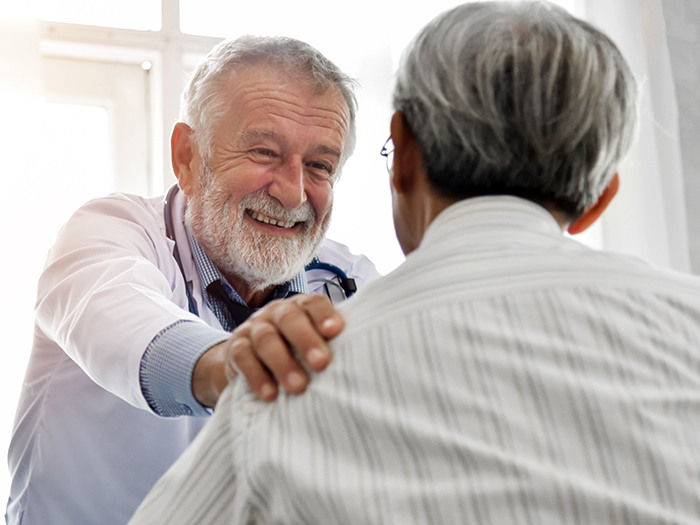 “Don’t trust anyone over 30.” Remember that slogan? That was ageism in the 1960s—treating people unfairly and unkindly just because of how old they are.

Now the tables are turned. Your 30th birthday has come and gone, and today you might find yourself being dismissed with the catchphrase “OK, boomer.” That’s ageism now—and it’s still unfair.

Yet it shows up in lots of ways. Maybe you’ve been passed over for a promotion, ignored by a waiter at a trendy restaurant, or denied a credit card—just because of the year you were born. But worst of all, when ageism happens in a medical setting, it can be downright dangerous.

In fact, ageism can make you sick, according to new research from Yale University. Among people over 60, ageism is responsible for 17 million cases of the most expensive health conditions in America every year, including cardiovascular disease and diabetes.

Ageism can impair your memory, lead to injuries, and make symptoms of depression worse. It can even shorten your life expectancy by more than seven years.

That makes ageism a big problem—with a very big price tag. According to Yale researchers, ageism is responsible for $63 billion a year in excess health costs.

“Ageism is real, and it can kill you,” says Elizabeth Landsverk, M.D., a geriatrician in Burlingame, California. It can keep you from getting the right treatment—or any treatment at all—for a genuine health issue just because you’re an older adult. Studies have shown, for example, that adults over age 60 are less likely to get the most effective care for breast cancer, lung cancer, and heart attacks.

Spot Ageism in the Doctor’s Office

The classic example of undertreatment: a true story about a 96-year-old man who went to the doctor for knee pain. “The doctor examines the patient and says, ‘What do you expect? Your knee is 96,’” says Dr. Aronson.

“The patient replies, ‘But my other knee is 96 too, and it’s fine,’” she continues. “Even if the patient didn’t want surgery, the doctor could have treated his pain and made him feel more comfortable.”

Ageism can also be at play when people are overtreated. Prostate cancer screenings for older men, for example, can lead to unnecessary surgeries and time in intensive care. The current recommendations from the Centers for Disease Control and Prevention are that men between 55 and 69 should discuss the benefits and risks of prostate screening with their doctor, and men 70 and up should not be screened routinely.

Plus, some medications that work well for middle-aged adults may cause confusion in older people—leading to a misdiagnosis of dementia. That’s why it’s important to review all your prescriptions with your doctor and ask if there are any medications you should avoid.

“Healthcare ageism happens when the doctor automatically attributes your problems to your age,” explains Dr. Aronson, rather than listening carefully and treating your concerns appropriately. “At no age does your entitlement to good care go away.”

Here are two other ways that ageism is built into our medical care.

Doctors-to-be seldom learn much about how to care for older adults. “Medical students get years of training on adults and months on children, but only a few weeks on older folks,” explains Dr. Landsverk. “They’re just not trained to be aware that symptoms are different in elders.”

The result: There are only about 3,600 full-time practicing geriatricians—doctors specializing in the care of older patients—looking after more than 49 million older Americans, according to the American Geriatrics Society.

Every year, amazing new drugs are introduced—after careful clinical trials to make sure they’re safe and effective. But until 2019, clinical trials through the National Institutes of Health weren’t required to include adults 65 and up.

Lack of clinical trials can lead to serious consequences. After all, people over the age of 65 are seven times more likely than younger folks to be hospitalized for adverse drug reactions, according to a study in JAMA.

“Without these clinical trials on older adults, the outcomes may not be good,” says Dr. Aronson. “That’s because older people metabolize drugs differently and their organs function differently.”

5 Ways to Stand Up to Ageism

No matter how ingrained ageism is in medical care, you don’t have to put up with it. Take these steps to make sure you get the care you need and deserve.

It can be hurtful—and harmful—when other people discriminate against you because of your age. But it’s even worse when you direct that negativity against yourself.

The best way to boost that positive attitude? Stay engaged in positive activities, like exercising, connecting with friends, and learning new things. And avoid using phrases like “senior moment.” Everybody forgets something now and then.

2. Speak Out on Elderspeak

When the receptionist at your doctor’s office or the nurse in the hospital calls you “sweetie” or “dearie,” does it make you feel as if you don’t really matter? Have you ever been spoken to in a high-pitched, singsong voice typically used for a child?

That’s elderspeak, and it can be dangerous. In one study, older adults who were addressed in this kind of patronizing speech performed worse on cognitive tasks than those who were spoken to respectfully.

To put a stop to elderspeak, use “I” language. “Say, ‘I realize you’re trying to be nice, but I don’t feel good when you call me that,’” suggests Dr. Aronson. “Acknowledge that they mean well, but let them know exactly how you’d like to be addressed instead.”

Older adulthood stretches from age 65 all the way up to your 90s and beyond, so it’s only natural that your health needs change with the years.

“I have patients in their 80s who play tennis three times a week and 60-year-olds who are very ill,” says Kathryn Boling, M.D., a family medicine specialist in Baltimore. “Expect to be treated according to your individual needs.”

Here’s how to find a new doctor as an older adult.

4. Be Part of the Change

You’re part of a vast movement—more than 10,000 baby boomers will be turning 65 every single day until 2029. To learn more about how you can advocate for systemic change, check out policy and advocacy news from the American Society on Aging.

Don’t be afraid to demand these changes—it’s good for everybody, including yourself.

“We know from studies of older people that the more proactive they are, the more they demand their rights, the greater the sense they have of their own competence,” says Dr. Aronson. “That makes you feel better about yourself—and the better you feel about yourself, the healthier you’re likely to be.”

5. Never Apologize for Being Old

Be proud of the life you’ve lived, and expect to be respected for that.

“If you’re old, that means you’ve succeeded as a human,” says Dr. Aronson. “Instead of pretending that age doesn’t matter, work with your doctor to make old age as great as it can be.

“A lot of things we write off as old age can be mitigated or even cured by good living—exercise and a healthy diet,” she continues. “You may not be able to do all the things you used to do, but you can still do a lot. And studies show that the older you get, the happier you are.”

SilverSneakers members can enjoy SilverSneakers On-Demand workout videos from home. If you have a Medicare Plan, it may include SilverSneakers—at no additional cost. Check your eligibility instantly here.