Age is just a number, and here’s the proof. 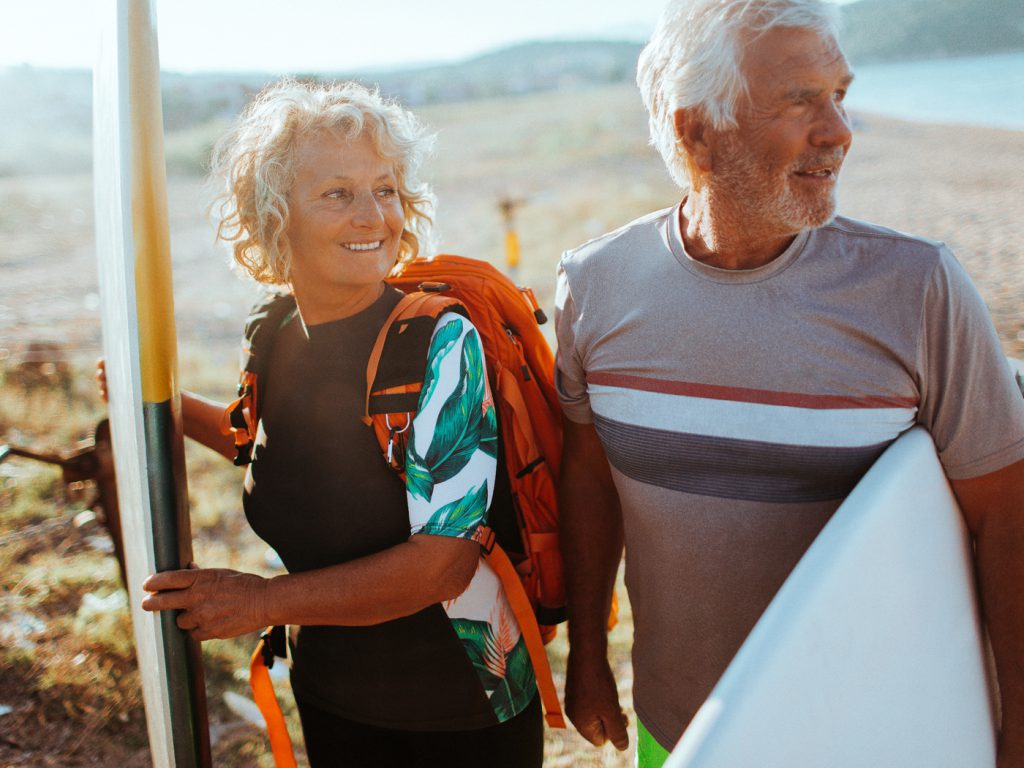 Growing older is inevitable. Getting less healthy is not.

“You get very frail, you lose your mind—people in the past thought that’s what always happens when you get old,” says Marie Bernard, M.D., deputy director of the National Institute on Aging. “That’s not true. With better nutrition, better health care, and better education, people are living longer and healthier lives. But getting rid of those old presumptions is hard.”

Step one? Stop thinking of aging as a disease, says Camille Vaughan, M.D., section chief of geriatrics at Emory University and a physician at the Atlanta V.A. Medical Center, and start embracing this truth: The fate of your health isn’t fixed, no matter whether you’re 65 or 85. Below, we bust five common myths about aging—and equip you with strategies to defy the most crippling of senior stereotypes.

Myth #1: Your Brain Will Decline

Hitting your mid-60s means a lot of things—retirement, grandkids, travel—but watching your brain turn to mush isn’t one of them.

“As we age, we certainly lose certain aspects of our brain function”—your spot-on memory for specific events and details, for one—“but we gain a lot too,” says Sharon Bergquist, M.D., an assistant professor of medicine at Emory University and an expert in healthy aging. “It’s not really a downhill process. You’re just trading different strengths and weaknesses.”

Translation: You may not be able to remember the exact date of your grandchild’s birthday, and sometimes it may take a second to remember why you walked into your bedroom (your keys!). But the upshot is you now have a wealth of life-accumulated insights that your younger self lacked. “If you look at complex decision making—which requires experience and wisdom—older adults can make just as good, if not better, decisions than a 20-year-old,” says Dr. Vaughan.

Same goes for emotional intelligence and verbal ability. And what might seem like slower mental response time may actually signal the overstuffed memory files in your brain. “It takes longer to retrieve things,” says Dr. Bernard.

That said, you should be actively exercising your brain. The more things you do to build strong, diverse neural connections—traveling, trying new things, socializing with an array of people—the more likely you are to delay the onset of memory loss, says Dr. Bergquist.

To learn about other ways you can protect your brain, talk to your doctor. “One out of three individuals 85 and older may develop Alzheimer’s-type dementia, but that means two out of three do not,” Dr. Bernard says. “So it’s not an inevitable part of aging.”

Yes, there are some age-related changes that can affect your appetite. For starters, if you’ve lost muscle and exercise less, your body will require fewer calories, says Dr. Bernard. This means you won’t need to pile your plate as high as you once did.

There are less visible changes, too. “As you get older, the stomach empties a little slower, so you tend to get fuller,” says Dr. Bergquist. Higher levels of cholecystokinin (a fullness hormone) and less-sensitive taste buds can also contribute to a shrinking appetite.

What’s not normal? A total loss of appetite—and the weight loss to match it. “Weight loss, pain when you’re eating, a lot of heartburn, nausea—those are red flags that there could be a medical condition causing the loss of appetite,” warns Dr. Bergquist. If you have a chronic illness, you could also be experiencing a side effect of medication.

If your clothes are feeling looser, consult your doctor, who can help you figure out the cause and the appropriate solution. Continue taking medications as prescribed, but do let your doctor know about all the medications you take and any concerns. In the meantime, awaken your palate by cooking with more aromatic spices, such as ginger, saffron, or cumin. “To bring back enjoyment of food, people end up eating things that are really salty or sweet, which is the worst way to do it,” Dr. Bergquist says. “Aromatic spices make foods flavorful, but in a healthy way.” (Check out how to make easy spice blends.)

You spent a fortune on your Sleep Number—so why just use it for shut-eye? A 2015 Swedish study found that sexual satisfaction among seniors has been rising since the 1970s. And according to a study in the New England Journal of Medicine, more than half of older adults ages 65 to 74 are still sexually active.

“It seems there is a U-shaped curve to satisfaction—it’s higher when you’re very young, goes down when you’re in middle age, and goes up again with older age,” says Dr. Bernard. The obvious explanation: Once your kids are grown and your career is winding down, you have more time and mental space for intimacy. Plus, since older men often take longer to achieve arousal, couples may find themselves more sexually in sync, enjoying intimacy builders like holding hands, hugging, and kissing before the main event.

That’s not to say there aren’t changes in libido and intimacy that can come with age. After menopause, women’s estrogen levels drop, making water-based lubricant (which is less irritating than petroleum-based products) a worthwhile tool, says Dr. Vaughan. Another hurdle: If one member of a couple has become the other’s caregiver, “that changes the dynamic of the relationship,” she says, forcing them to rethink the way they connect. For example, if nighttime is typically the chronically ill partner’s toughest time of day, morning sex might make more sense. And remember, it’s okay to forgo intercourse in favor of other types of intimate touch you both enjoy.

New partner? You may not need to worry about pregnancy, but you do still need to protect yourself from sexually transmitted diseases. The National Institute on Aging recommends using a condom during sex and talking to your doctor about other ways to practice safe sex.

It’s true: You shed 3 to 5 percent of your muscle mass with every decade after 30, thanks to increasing inflammation and declining hormone levels, says Dr. Bergquist. But that doesn’t mean you can’t regain at least some of what you’ve lost.

“Resistance exercise helps build up mass, and we’ve found that’s something people can do throughout their lifespan,” says Dr. Bernard, who adds that even 90-year-olds can see their physiques change with this type of training. Although resistance exercise using weights, resistance bands, or your bodyweight is the ideal, you can also tone up through everyday tasks like gardening or cleaning, she says.

The payoff? The stronger you are, the less likely you are to fall—and if you do, your muscle will act as padding to help cushion the blow. There’s also a big-time benefit to your brain. Exercise triggers a flood of brain-derived neurotrophic factor, or BDNF, a growth factor that supports the formation of new neural connections, says Dr. Bergquist.

If your grandkid’s iPhone or Android intimidates you, that’s all the more reason to give it a try. Ten years ago, researchers thought the brain stopped forming new connections at a certain age, but now there’s evidence that we keep generating new neurons throughout our lives, says Dr. Bernard.

“As soon as you learn a new skill, you build crisscrossing pathways, so you create stronger, more, and different connections in your brain,” adds Dr. Bergquist.

Some older adults find trying new things daunting or may be concerned they’ll look senile, says Dr. Bernard. If that’s you, stick to a hobby that plays to your brain’s strengths (see myth #1) instead of trying something that requires multitasking, a skill that’s known to decline with age, suggests Dr. Bergquist. “Because you’re naturally not as good at it, you may get discouraged,” she says.

Just be prepared to practice more than your younger self would have. “I picked up violin a few years ago, and my teacher said any technique I was learning would require practicing as many repetitions as years I am old,” says Dr. Vaughan. Although that stat may not be scientifically proven, she says, the idea holds true: It may take longer to learn a new skill than it used to, but given the time and motivation, you can learn just as well as a younger person.