Check your fingers and toes for signs of serious health issues. 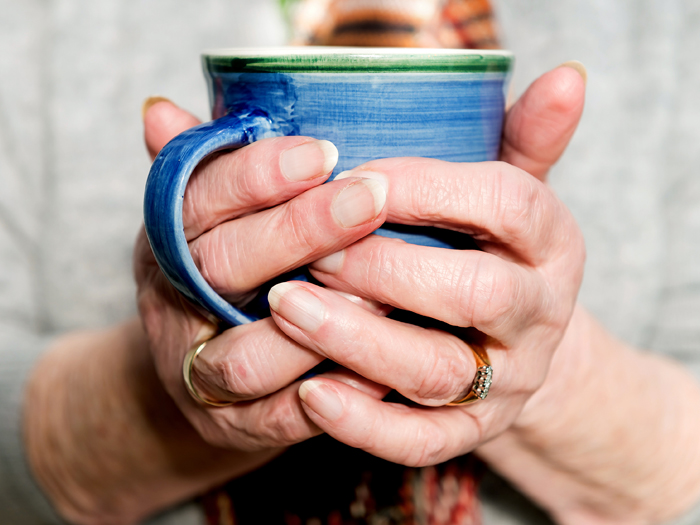 Like your hair, your nails are made up of dead cells. That’s why it doesn’t hurt when you cut either one.

Unlike your hair, you probably don’t give your nails much thought, except when you’re clipping them or treating yourself to a manicure. But you might want to change that: Your nails can reveal some pretty important things about the health of your entire body.

“Nails don’t just serve an aesthetic function,” says Shari Lipner, M.D., Ph.D., a dermatologist at New York-Presbyterian Hospital and Weill Cornell Medicine. “You need your nails to pick up small objects, button your shirts, and protect digits. They are quite important structures.”

What exactly should you be looking for? Here are seven nail issues that may signal a more serious health concern. If you notice any, call your primary care doctor or dermatologist to determine whether you should make an appointment.

A vertical brown or black streak in your nail is one of the most important changes to watch for, Dr. Lipner says. That’s because it might signal a serious type of skin cancer called subungual melanoma, or melanoma of the nail unit.

While nail melanoma is relatively rare, it tends to come with a worse prognosis than other types of melanoma, possibly because it’s often not diagnosed until the cancer is already at a later stage, according to a review in the American Journal of Clinical Oncology.

It’s worth noting that other nail issues can look like a melanoma, Dr. Lipner says. One example: a subungual hematoma, which is a collection of blood trapped beneath the nail plate. This is usually caused by some sort of trauma, like if you slammed something on your finger or stubbed your toe.

However, there are some important differences between a melanoma and hematoma. According to Dr. Lipman, concerning signs of a melanoma are:

On the other hand, if the brown or black mark under your nail is actually blood from injury, you can expect to see it gradually move out as your nail grows.

But nails take a long time to grow—especially toenails—so if you’re concerned about a mark on your nail, make an appointment with your doctor to check it out.

Possible cause: Iron deficiency or anemia

This nail deformity is not subtle, and it would definitely catch your attention. It’s called koilonychia, or “spoon nails.” It’s commonly caused by iron-deficiency anemia, a condition in which your body lacks enough iron to produce a substance in your red blood cells that helps transport oxygen.

There’s a pretty easy way to identify this condition, Dr. Lipner says. “Put a drop of water on the nail. For normal nails, that water droplet will slide right off,” she says. “But if you have a spoon-shaped nail, that drop will stay right on the nail.”

If you notice scooped-out or spoon-shaped nails, your doctor will likely order some blood tests to determine if anemia is the issue. If you’re iron-deficient, your doc may recommend an iron supplement.

Other causes include working with petroleum-based products, living at a high altitude, or trauma. In some cases, it’s hereditary, according to a review in the Permanente Journal. If you learn it’s not anemia, your doctor may order further tests to pinpoint the reason and suggest treatment options accordingly.

Possible cause: Psoriasis or alopecia areata

Nail pitting shows up as tiny white dents in your nail—as if they were made by an ice pick.

“They’re actually small indentations in your nail plate,” Dr. Lipner says. “And while they’re not specific to one certain disease, they often indicate psoriasis of the nail.”

Psoriasis is a condition that occurs when your body makes new skin cells faster than normal—in days instead of weeks. Along with pitting, nail psoriasis can also cause:

If any of these symptoms occur, your doctor will be on the lookout for other signs of psoriasis—like a rash or patches of dry, scaly skin—as well as for arthritis. According to a study in Arthritis Care and Research, psoriasis patients who had nail problems were almost three times as likely to develop psoriatic arthritis, an inflammatory kind of arthritis that can cause swollen, painful joints.

Nail pitting is also commonly seen in alopecia areata, an autoimmune form of hair loss in which your hair falls out in round patches. As a result, your doctor may want to do a hair exam—both on your head and throughout your body.

Some people are simply born with an over-curvature of the nails, when they grow outward and around the fingertips. But when clubbing develops out of the blue, it can signal something more serious.

“If it presents later in life, a checkup should be done for lung disease,” Dr. Lipner says. This can include things like pulmonary fibrosis (scarring of the lungs), bronchiectasis (a condition in which your airways slowly lose their ability to clear out mucus), or lung cancer.

A simple DIY test can point to clubbing: Place your thumbs back to back so that the nails touch. You should see a small diamond between your nail beds and the nails. If that small space is missing, you may have clubbing.

The development of clubbed nails is rare—it’s not even seen very often in Dr. Lipner’s specialized nail clinic, she says. Still, if you notice a change in the curvature of your nails, bring it up with your doctor.

Possible cause: A bad case of the flu or other major health stress

A line, depression, or indentation that goes across your nail horizontally—in one or multiple nails—may be something called Beau’s lines.

“It means there was a temporary pause of nail growth,” Dr. Lipner explains. “It reflects a disease, fever, or some kind of systemic stress that happened in the past few months.”

If you notice this indentation, think back to what was happening a few months ago. Were you in the hospital? Sick with a bad case of the flu? With a serious illness, your nail growth cycle stops temporarily—that’s the ridge you see—but will resume when you start to feel better.

A fungal infection is the most common cause of thickened, yellow nails—usually your toenails, but it happens to fingernails too. Along with the discoloration, you may notice crumbly tissue under the nail plate, says dermatologist Ramsey Markus, M.D., of Westside Dermatology in Seattle.

Older adults are more likely to get a fungal infection, since nails can become brittle and dry with age, causing cracks that allow fungi to get in. Plus, your immune system weakens with age, so it may not be able to protect as well against infection, Dr. Markus says.

If you have a fungal nail infection, your doctor will most likely prescribe an antifungal medication you take by mouth, though some patients may be able to use an antifungal they can apply to the site of infection, Dr. Lipner says. Over-the-counter nail antifungals haven’t been studied as well, so she doesn’t recommend using them.

If all of your nails have turned yellow, there may be something else at play: a very rare condition called yellow nail syndrome (YNS).

“Yellow nail syndrome typically involves all 20 nails instead of just one or a few,” explains Kelly H. Tyler, M.D., a dermatologist at Ohio State University Wexner Medical Center. “It can be a sign of an underlying disease in the lungs, such as bronchitis, or fluid around the lungs.”

YNS has also been associated with lymphatic problems, so you may also see swelling, especially in your extremities, Dr. Markus adds.

As mentioned, YNS is very rare, but if you notice all three symptoms—yellow nails, respiratory problems, and swelling—bring it up to your doctor to determine the best next steps.

Healthy nails are mostly pink with a little white half-moon at the base. But if that half-moon extends more than two-thirds up the nail bed, they’re called Terry’s nails.

“In Terry’s nails, the white part of the nail is greatly enlarged, occupying about 90 percent of the nail,” Dr. Ramsey says. And it can signal some serious health issues, particularly liver disease—especially cirrhosis of the liver.

Experts believe that increased fluid in the nail bed right underneath the nail is responsible for the change in appearance, Dr. Ramsey says.

See your doctor to understand the underlying cause and get prompt treatment if needed.