We asked a registered dietitian to help us decode the nutritional profiles of cow- and plant-based patties. The results might surprise you. 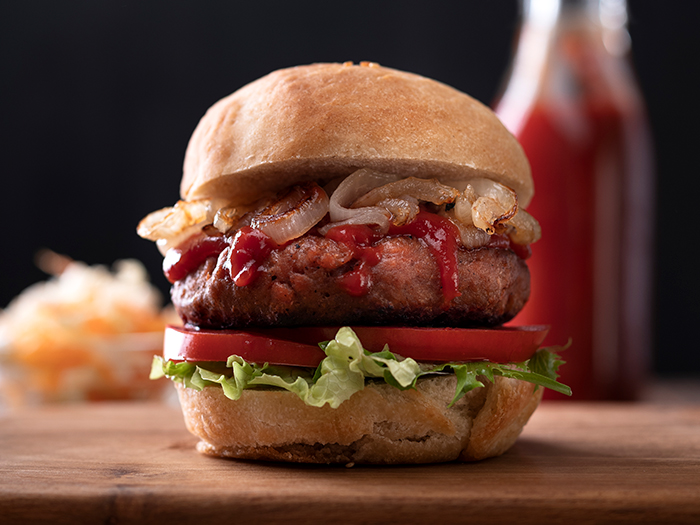 You remember the slogan: Beef, it’s what for dinner.

That was then. Today, we’re beyond that—literally. Squares of Beyond Beef, a trendy plant-based ground meat alternative, sit side by side packets of real ground beef in the butcher’s case. Burger King’s Impossible Whopper, made from Impossible Food’s buzzy faux beef, sold so briskly that the fast food giant added three additional plant-based burgers to the menu.

Unlike good old Gardenburgers, the new meat substitutes (most famously, Impossible and Beyond Meat products) have been created to taste and cook like actual meat.

This new generation of meatless patties sizzle in a hot skillet, sear and brown like red meat, and provide a satisfying, juicy mouthfeel when you take a bite. On a bun with flavorful toppings, it’s indistinguishable from a beef burger.

So, is hitting the drive-thru healthy now?

Not so fast. We asked Jonathan Valdez, R.D.N., owner of Genki Nutrition and spokesperson for New York State Academy of Nutrition and Dietetics, to set the record straight.

The new plant-based meats might be good news for your taste buds, but they may be less great for your heart. These burgers taste fatty because they are fatty.

Coconut oil is a key ingredient in the most popular products. Like beef fat, coconut oil is a saturated fat. And the American Heart Association (AHA) recommends getting no more of 13 grams of it per day to keep LDL (often called “bad”) cholesterol levels low and minimize the risk of heart disease or stroke.

There may be some nutritional upsides to the new plant-based meats, though. “They have no trans fat and no cholesterol,” Valdez says. On the other hand, 80 percent lean ground beef contains 1.3 grams of trans fat and 80 milligrams of cholesterol.

A common concern about plant-based diets is lack of iron. Iron is important for our red blood cells, which carry oxygen, and red meat is very rich in it.

“Beyond Burger and Impossible Foods have created products that contain 25 percent of the daily value of iron,” Valdez says.

That’s equivalent to beef, but not all iron is created equal. The plant-based iron in these products isn’t as easy for our bodies to use as the iron in beef, so you have to eat more of it to get the same benefits.

Like many highly processed foods, plant-based meats are often fortified with vitamins and minerals to make them more nutrient-dense, according to Valdez. “But one nutrient that plant-based meat alternatives tend to lack is selenium,” he says.

Selenium is an important nutrient for older adults. It plays plays a key role in protecting healthy cells, and it’s also necessary for the thyroid to make and regulate its hormones. A study in the American Journal of Clinical Nutrition found that higher selenium concentrations in the body were associated with a reduced risk of heart disease.

Valdez says you can find selenium in meat as well as cereals, grains, and Brazil nuts. If you do opt for a strictly plant-based eating plan, be sure to get enough selenium from the plant-based sources listed above, or discuss supplements with your doctor.

Checking the sodium content on a food label is a good habit, since most packaged foods are loaded with the stuff. Plant-based meats are no exception.

“The sodium content is typically higher than real meat,” Valdez says. “Some plant-based meat alternatives have up to 300 milligrams more sodium than real meat.”

The AHA recommends keeping daily sodium intake below 2,300 milligrams to reduce the risk of high blood pressure and heart disease. While the 300 milligram difference between plant-based meat and real red meat isn’t huge, it’s something that older adults should keep in mind, particularly those with high or borderline-high blood pressure.

Plant- Versus Cow-Based Burgers: The Verdict

“Plant-based meats are fairly heavily processed foods,” Valdez says, adding that they are fine once in a while but shouldn’t be a cornerstone of your diet.

Are plant-based meat alternatives nutritionally superior to beef? “No,” Valdez says, “they are just different.”

However, for many, nutrition isn’t the only consideration when making decisions about what to eat. Many adults avoid beef altogether to lighten their carbon load, and some vegans stick to plant-based options because they’re committed to animal welfare.

No matter what informs your food choices, Valdez stresses the most important thing to do when it comes to healthy eating is to make sure that half of your plate is filled with fruits and vegetables.

Whether you want those fruits and veggies alongside an Impossible Burger or a real one is up to you.