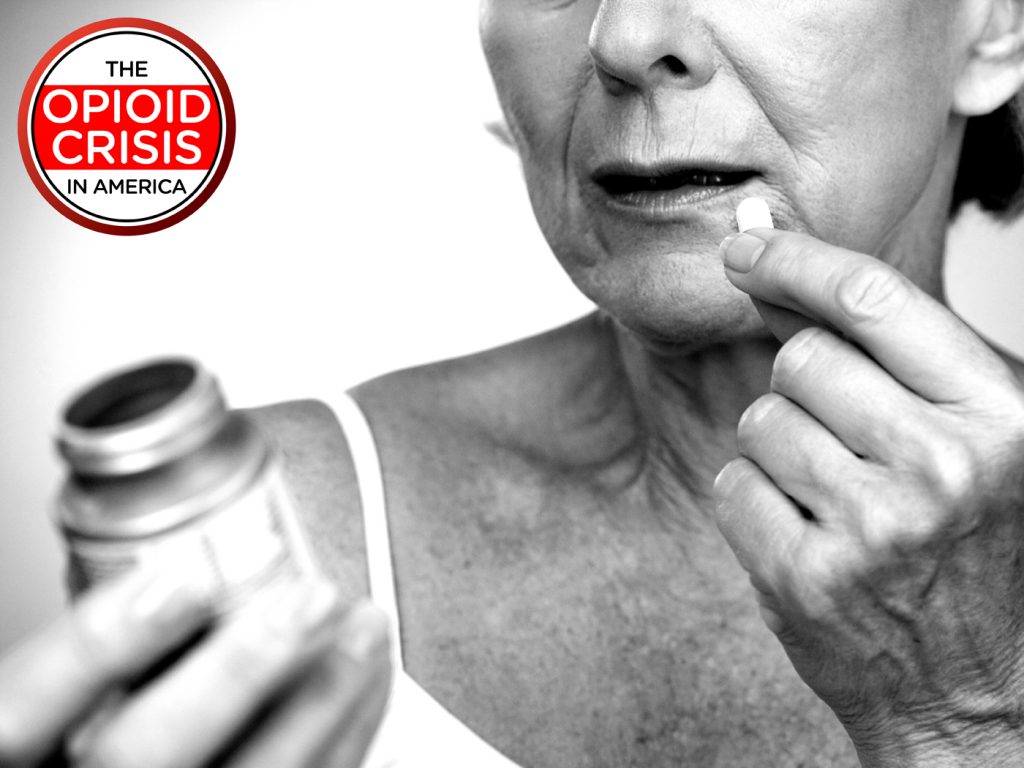 In a three-part series, SilverSneakers reports on the opioid crisis in America. Part 1 explores the pros and cons of opioid use for chronic pain or after surgery. Part 2, below, reveals the warning signs of dependency or addiction to watch for when you or a loved one is taking a prescription opioid. Part 3 explains what to do if you suspect a loved one is struggling with an opioid addiction.

Many people who take opioids do so safely and responsibly. Some use these pain-relieving drugs for a short time, such as after surgery, while others use them for months or even years to help cope with chronic pain.

But opioids also have the potential to be addictive. According to a study in JAMA Internal Medicine, 15 percent of seniors are prescribed opioids during a hospital stay, and 43 percent still use them three months later. And the National Institute on Drug Abuse reports that 21 to 29 percent of patients who were prescribed opioids for chronic pain end up misusing these drugs.

Another way to look at the situation: In 2015, more people misused prescription painkillers than used cocaine and methamphetamine combined, according to the Centers for Disease Control and Prevention.

Generally speaking, people who use opioids for months are more apt to become addicted than those who only use them for a few days or weeks, but that’s not always the case. Some people seem to be more prone to misusing these drugs when they’re first introduced to them, according to the American Chronic Pain Association.

Many people use opioids for a very short duration, such as for a few days after surgery. Provided you follow the dosing instructions and don’t take more than you need, it’s unlikely that you’ll become reliant on these meds, says Vinnidhy H. Dave, D.O., director of medical pain management at the Hospital for Special Surgery in New York. But if you’re taking a high dose for a week or more, then you can quickly build up a tolerance.

“You’re considered ‘opioid tolerant’ if you’re taking the equivalent of 60 mg of morphine daily for a week or longer,” Dr. Dave explains. (For example, 30 mg of oral oxycodone, 8 mg of oral hydromorphone, or a skin patch with 25 mcg per hour of fentanyl are equivalent to 60 mg of oral morphine.) That doesn’t mean you’re addicted, but it likely means that your body has gotten used to the medication and that you’re physically dependent on it. If you’re on a lower dose of an opioid, it might take a few weeks or longer to become physically dependent.

Physical dependence is not the same thing as addiction, but since your body now expects to have the drug in your system, you’ll have withdrawal symptoms if you try to stop abruptly, Dr. Dave says. He notes that other categories of drugs, such as antidepressants, also cause a similar dependency. It’s important to work with your doctor to safely stop taking these types of drugs without withdrawal symptoms or adverse affects.

People who have become dependent on opioids and then stop quickly might experience withdrawal symptoms, including:

Physical dependence on opioids is considered a normal response to taking these drugs for an extended period. Addiction, on the other hand, is not normal—though it is becoming more common.

Are You Addicted? Watch for These Signs

Addiction is characterized by overwhelming cravings that feel impossible to control. “Addiction is when a patient continues to use despite harm,” says Jianguo Cheng, M.D., Ph.D., president-elect of the American Academy of Pain Medicine and a pain management specialist at the Cleveland Clinic. That might include harm to yourself as well as to others.

“When a patient on opioid therapy comes in for a follow-up, we always review the outcomes to see if the treatment is working,” Dr. Cheng says. Are you feeling less pain? If so, that’s a good sign.

But doctors also keep an eye out for signs that the medication is having a detrimental effect on a patient’s life. Can you continue with your normal daily life? If you used to be an active person and now you’re just sitting there watching TV and aren’t functional, that’s a red flag, Dr. Cheng says.

People who are addicted often tend to break ties or at least stray from friends and family because the addiction becomes all-consuming, adds Dr. Dave. “You become more focused on when you’re taking your medication next and when your next refill is. Life becomes centered around the medication,” he says. Meanwhile, you might lose interest in things that you used to enjoy, whether that’s jogging or knitting or even seeing your grandchildren. “It’s similar to the symptoms of depression,” Dr. Dave says.

How to Stop Using Opioids

Anyone who’s been using opioids for a while and wants to stop will need a plan—and support. The details will depend on a variety of factors, starting with whether you’re only dealing with a physical dependency or if you need help for addiction.

Most opioid users who are not addicted can simply work with the doctor who prescribed the meds to develop a weaning schedule. The goal: to cut back on your dose very slowly so you don’t end up with withdrawal symptoms. “Unless you’ve been taking extremely high doses, this process usually takes one to two weeks,” Dr. Cheng says.

If you’ve become addicted to an opioid, then stopping is going to be much more complicated—but it can help you avoid overdose, early death, and further harm to loved ones. Breaking your physical reliance on the medication is part of it, but you’ll also need treatment to tackle the addiction itself and all the physical and emotional issues that go along with it. Unfortunately, there are no quick fixes. And whatever addiction treatment you seek out, you should know that a long-term struggle may be in store.

“Addiction is a chronic illness, and there’s no cure,” says psychiatrist Indra Cidambi, M.D., vice president of the New Jersey Society of Addiction Medicine and founder of the Center for Network Therapy. “The goal is to push relapse as far as possible. But I do have some patients who have been sober for 30 years.”

If you need help for addiction or are concerned about warning signs you’ve noticed, talk to your primary care doctor or the doctor who initially prescribed your pain medication, and ask for a referral to a specialist. Or search for a specialist who’s a member of the American Society of Addiction Medicine by clicking here.

You can also get referrals to local treatment facilities, support groups, and community-based organizations by calling the Substance Abuse and Mental Health Services Administration’s National Helpline at 1-800-662-4357. It is a free, confidential information service that is available 24 hours a day, 365 days a year.

Important: If you or someone you love takes opioids, know the signs of opioid overdose and call 911 immediately if their lips or fingernails turn purple or blue, their breathing or heartbeat slows or stops, or they cannot be awakened or are unable to speak.

The Opioid Crisis in America