Avoid these common slipups to enjoy your food without risk of foodborne illness. 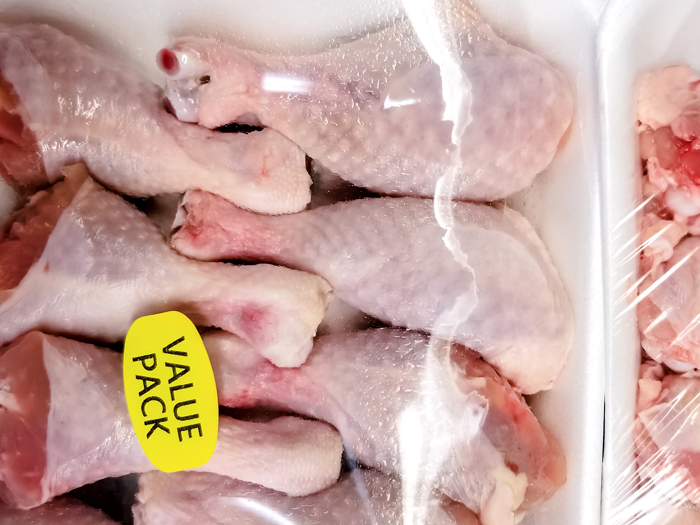 Some food safety rules are pretty intuitive: Wash your hands before and after cooking. Store perishables in the fridge. Don’t leave groceries in your car in the hot sun.

Then there’s a whole other set of rules, the ones that aren’t so obvious and therefore rarely followed. This set is a primary reason foodborne illness, or food poisoning, is astoundingly common.

In fact, the Centers for Disease Control and Prevention (CDC) estimates that about 48 million people experience a foodborne illness every year in the United States. That’s a lot of meals gone wrong.

The Food and Drug Administration (FDA) and United States Department of Agriculture have guidelines in place to help make sure food sold in the United States is safe for consumption, and these agencies alert the public when there are food recalls or foodborne illness outbreaks. Still, mistakes can happen elsewhere in the process—when you’re shopping, storing, cooking, and serving that food in your own kitchen.

Here are 11 common food safety mistakes you might be making, plus expert advice on how to clean up your act.

Mistake #1: You Buy Meat and Dairy from the Top of the Stack at the Supermarket

Any fresh meat, fish, or dairy you buy at the grocery store should feel refrigerator-cold. You probably know that. But do you know what “refrigerator-cold” actually means?

“If you can see a thermometer in your store’s refrigerator case, make sure it’s at 40°F or below,” says Jeff Nelken, a food safety expert and consultant.

No thermometer in sight? Everything should feel cold to the touch, but also, “look to make sure meat and dairy isn’t stacked five-high,” Nelken says.

If it is, pick from the bottom of the stack. “The ones on top don’t get the best cold exposure, and they’re exposed to room-temperature air,” he says.

Mistake #2: You Don’t Keep Raw Meat Separate from Other Foods in Your Cart

A 2018 study in the Journal of Food Protection sampled 402 swabs from meat packages and found bacteria from raw poultry products can transfer to the packaging via meat juice, then theoretically get transferred to other foods in your grocery cart or even around your home when you touch it.

“When you’re buying meat, make sure it’s wrapped well and not leaking at all,” Nelken says. “Check to make sure there are no holes in its packaging, and consider picking it up with a plastic bag you can then pull over the package to keep it enclosed.”

That way, you’ll avoid touching the outside of the package, and the package won’t touch your other groceries, reducing the risk of cross-contamination.

Mistake #3: You Leave Food Sitting Out at Room Temperature for Too Long

“Food should never sit out at room temperature for longer than two hours,” says Jennifer Quinlan, Ph.D., an associate professor of nutrition sciences at Drexel University in Philadelphia.

That’s true for your groceries, dinner leftovers, and especially for food sitting out during a party.

Unless the food you’re serving is shelf-stable (bread, chips, candy) or preserved (jam, pickles, charcuterie), it shouldn’t sit out longer than two hours.

Food served at an outdoor party has an even shorter time limit. “If it’s really warm out, you want to keep it to one hour or less,” Quinlan says. “That happens fast. You put that potato salad out, and boom, it’s an hour later.”

To extend the food safety zone, Quinlan recommends investing in food warming trays for hot food so it’s kept at a minimum of 140°F or serving platters of cold food over ice to keep it at or below 40°F.

Another option is to make several small platters of a dish instead of one large one, Nelken suggests. That way, you can keep most of the food in the fridge or oven and refill your serving platters as needed.

Mistake #4: You Lose Track of How Long Food Has Been Frozen

Quinlan recommends storing meat in the freezer to prolong its shelf life, then thawing it in the fridge the day before you plan to cook it. But food doesn’t last in the freezer indefinitely.

“Always date the food you freeze,” Nelken says. “And make sure you use the oldest stuff first so that it doesn’t sit for too long.”

Freezer lifetimes vary for different foods, but a few common ones include:

Mistake #5: You Allow Cooked Food to Cool on the Counter Before Refrigerating

This is most common among fans of leftovers and people who like to meal prep for the week. You make a few recipes on Sunday, portion them into individual containers, and let them sit out lidless to avoid that annoying layer of condensation that forms when hot food is contained too soon. It’s a smart strategy, right? Not exactly.

“There’s no benefit to cooling food to room temperature on the counter before you put it in the fridge,” Quinlan says. “That’s too much time in the temperature danger zone for bacteria growth.”

Best practices vary depending on the food and the temperature, Nelken says.

“If you’re trying to cool something that’s very hot, put it in an ice bath—a metal bowl or other container, sitting in a large container of ice and water—and stir until it’s warm, not hot,” Nelken says. Then, put it in the fridge right away.

Using shallow rather than deep containers can also help. “If you can, put your food in a shallower container so that you get cool air from the top and the bottom,” Quinlan suggests. “That way, everything will cool faster.”

It’s important to prevent any surface that’s touched raw meat from cross-contaminating other items. Ideally, you have multiple cutting boards: one designated for meat and another for vegetables. If you don’t, it’s crucial to wash your cutting board in between food prep stages, Nelken says.

As for other food prep surfaces, you can wipe down areas like counters with hot, soapy water after you finish cooking each food item.

It’s also a good idea to clean your counters and sink with a bleach solution a couple times per week or more if you prepare food on your counters every day. You can make a sanitizing solution by mixing one tablespoon of unscented chlorine bleach in one gallon of hot water, according to the FDA.

Several years ago, Nelken walked into about 20 different homes to check refrigerator temperatures. What did he learn? Most were above the recommended 40°F.

“Most people don’t have thermometers in their fridges, and most fridges in homes are between 45 and 50°F,” he says. “It’s worthwhile to spend three or four dollars to buy a thermometer to leave in the fridge, making sure it’s always 40°F or below. Home fridges are opened and closed a lot, so it’s common that they’re too warm.”

Freezers tend to be less volatile, but it’s worth checking every so often to make sure everything in yours is frozen solid, not slightly soft or oozing, Nelken says. According to the FDA, your freezer should be set at 0°F.

Mistake #8: You Store the Wrong Items in Your Refrigerator Door

The food stored in your refrigerator door gets exposed to the most warmth, thanks to all that opening and closing.

“There’s about a five-degree difference in foods that are kept in the door,” Nelken says. “I wouldn’t store sensitive items there.”

His recommendation: Keep condiments, juices, and water in the door, and place more sensitive items like dairy, eggs, and raw meat on the lower shelves, where the temperature is coldest. The upper shelves are best for foods that don’t need to be cooked, including leftovers, drinks, and ready-to-eat foods like tortillas, hummus, and deli meats.

You also don’t want to crowd the shelves too much. Unlike the freezer, the fridge shouldn’t be totally packed. Cold air needs to flow, and if it can’t, you’ll get inconsistent temps with pockets of warmth.

Mistake #9: You Wash Raw Poultry Before Cooking It

If you rinse or wash raw poultry before cooking, you’re in good company. According to a 2015 report in the Journal of Food Protection, nearly 70 percent of people do this. But you should stop.

Raw poultry often carries the illness-causing bacteria Campylobacter, according to the CDC. It may also contain Salmonella and Clostridium perfringens.

Rinsing your poultry doesn’t get rid of these pathogens. Instead, it increases your risk of splashing them to other areas, like the sink, countertops, and your hands, making you more vulnerable to foodborne illness.

You’re better off making sure you thoroughly cook poultry—and all meat—to a safe internal temperature to kill bacteria. For chicken, the innermost or thickest part should be a minimum of 165°F.

Speaking of safe internal temperatures, eating burgers with a little red or pink in the middle isn’t the smartest move.

“There’s a difference between ground beef and steak or roasts,” Nelken explains. “For whole cuts, the bacteria is only on the outside. So as you cook the outside, you kill the bacteria,” he says.

“But with ground beef, all of the meat has been exposed—through both the grinding and shaping processes—so it’s not enough to cook just the outside of your burger.”

Looking for pink spots won’t cut it. Experts recommend using a digital tip-sensitive meat thermometer. If it’s not tip-sensitive, you have to insert the thermometer to a certain depth before it can register the temperature properly.

Mistake #11: You Don’t Wipe Down Your Cans

Most canned food is heated above 140°F before it’s eaten, which kills bacteria, so this one isn’t a huge safety concern, Quinlan says. “It’s more of an ick factor.

“I wouldn’t tell someone to wash an entire can with soap and water before opening it, but I generally take a napkin or towel and wipe the top to get rid of dust,” she continues. “There could be dust around the rim, and it will get into the food when you open it with a can opener.”

Got more than a little dust? If the can is heavily dented, rusted, or swollen, toss it.