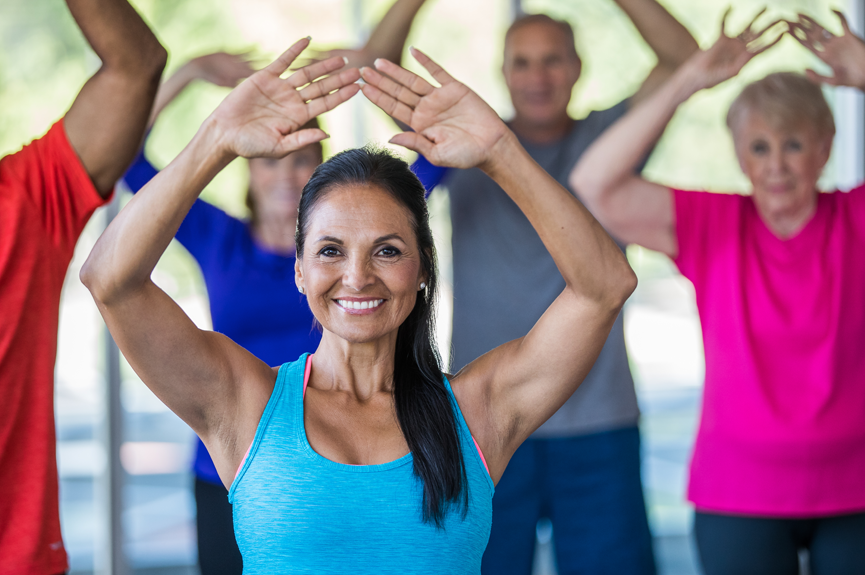 Fitness—especially senior fitness–decreases the risk for many types of cancer, diabetes, heart disease, Alzheimer’s and many other physical challenges. Everyone knows that exercise can help prevent many types of illnesses and ailments at every stage of life. While this seems to be common sense, many people still do not “take their medicine.” Fitness for seniors is particularly important since physical fitness can extend independence, dramatically reduce the risks of injury from falls and increase longevity. Scientific research has strongly suggested the correlation between fitness and long term well-being but proving the connection has been more difficult. Until now.

Scientists are increasingly sure that exercise is medicine. Some research strongly suggests that physical activity may be just as effective in treating and preventing illness as many prescribed medicines or invasive medical procedures. For instance, in September of 2016, TIME magazine published “The New Science of Exercise” which summarized some of the most current scientific evidence of exercise’s medical benefits. This huge body of evidence may encourage a cultural shift to prevention rather than treatment. As innovative as this may sound, it actually harkens back to an ancient approach to long-term health.

Before the 20th century, doctors focused on keeping people healthy, not just treating them. Exercise was a key component for maintaining health. Hippocrates thought exercise should be used along with diet to maintain well-being: “Eating alone will not keep a man well. He must also take exercise. For food and exercise…work together to produce health.” This ancient Greek physician is credited with laying the foundation for modern medicine. Perhaps his advice may become fashionable again. Despite the wise words of Hippocrates and a long tradition of focusing on daily health rather than dramatic and desperate treatments, the 20th century saw a massive shift in focus away from prevention and increased attention on treatment after illness struck. This corresponded with a rise in obesity and all its challenges.

With the rise of modern surgery and promising pharmaceuticals in the early 1900s, the attention switched from prevention to treatment. That focus has remained ever since. The shift came as the modern Olympics gained in popularity and many colleges built large stadiums and spent massive amounts of money on spectator sports. Television soon made such sports a nearly indelible part of American culture. Ironically, as participants became more physically impressive, more spectators lost sight of the benefits of remaining active. Physical activity became a privilege for elites rather than a medicine for all. Corporations studied exercise to improve performance for elite athletes instead of to determine the benefits for the rest of us.

Sadly, this persists today. Few Americans get the recommended 150 minutes of strength and cardiovascular activity per week. More than half of all baby boomers report doing no exercise whatsoever so senior fitness appears to be unimportant for many. No one is saying the treatment and cure of disease is unimportant. But maybe the scientific evidence will encourage more people to consider preventing disease in the first place, and not just through vaccines and other pills. Let’s look at creating a medicine of our own: physical activity. Whether you have exercised throughout your life or not, getting started now may help stave off and reverse many of the problems that accompany a sedentary lifestyle. Senior fitness may be exactly the right prescription for you.

There are many ways you can get the “prescribed” amount of exercise weekly, from doing light weights at your nearest fitness location, to finding a walking group or other group class at a community site. You can even count those minutes you’re chasing the grandkids around the house or walking through the grocery store. There’s a lot of ways to stay active and really no wrong way to do it. Fitness may be the best medicine as long as you take your recommended dose.