Even if you’ve never smoked a cigarette in your life, it’s still important to watch for these red flags that could point to this chronic lung condition. 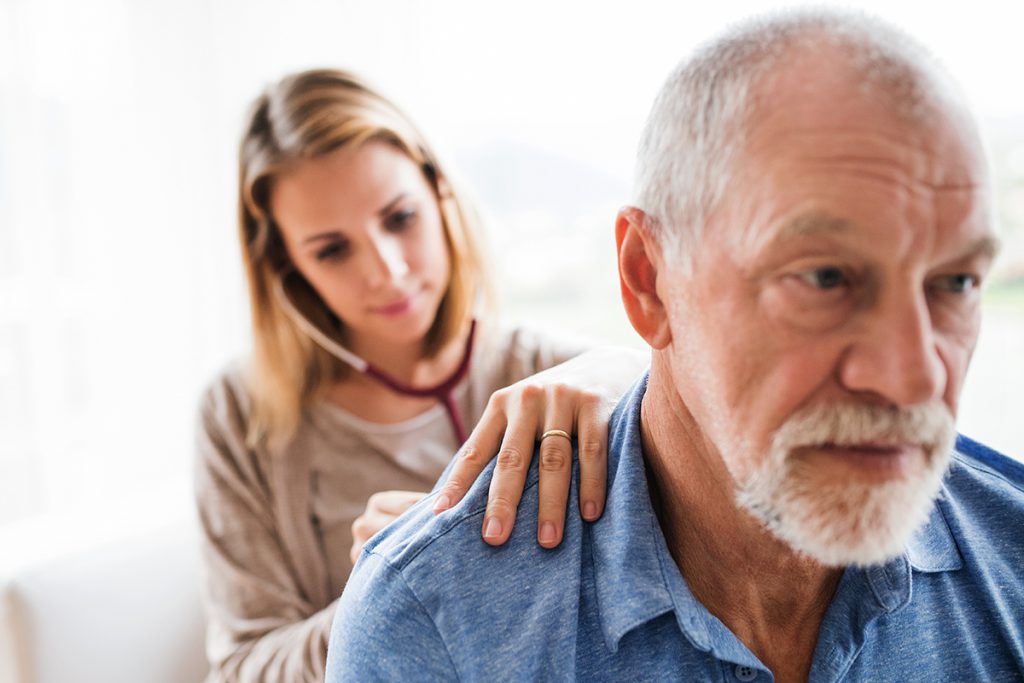 Smoking cigarettes, especially long term, is the most common cause of chronic obstructive pulmonary disease (COPD), a group of lung diseases that make it hard to breathe. But even if you’ve never touched a cigarette in your life—or you quit years ago—you may still be at risk for developing the condition.

That’s particularly true as you get older. The prevalence of COPD in people over age 65 is estimated to be about 14 percent, compared with 9 percent in those age 40 to 65. The majority of people living with COPD either smoke or used to smoke, but it’s also seen in those with long-term exposure to other irritants like air pollution, and there may be a genetic component.

No matter what the underlying cause might be, COPD is typically one or both of two conditions, according to Scott Kaiser, M.D., a geriatrician at Providence Saint John’s Health Center in California:

“The good news is that there are some great treatments available for these conditions,” he says. “But they work better if you intervene early, so getting checked when you’re having milder symptoms is key.”

If you notice any of these red flags, consider making an appointment for a COPD screening.

COPD Sign #1: A High-Pitched Whistling Sound When You Breathe

Also known as wheezing, that telltale whistling that comes when you breathe could be a major sign that you’re having a lung issue, Dr. Kaiser says. That’s because wheezing happens when airways are restricted in some way, which can happen with an inflammatory response like allergies or an infection.

As airways swell and narrow, they also produce extra mucus, further tightening the space. That can cause frequent coughing or spasms as your body tries to get more room for the air to get through.

Mild wheezing that comes along with a cold or during allergy season is usually not a problem, especially if it resolves within a few days. But if it’s ongoing and you’re having other symptoms, like frequent coughing, Dr. Kaiser suggests seeing your doctor.

A frequently cited sign of COPD, chest tightness can occur due to airway blockage, spasms, or respiratory infection. Although it can feel different for everyone, some people describe it as a heaviness, like a weight resting on the chest, or pressure that feels like squeezing or restriction.

“If you do some gentle stretching aimed at relaxing the muscles of the chest and shoulders and you’re still not getting relief, that could be an indication you’re dealing with more than tight muscles,” says Kate Ayoub, D.P.T., a physical therapist and health coach who often counsels people with chronic conditions.

With inflamed airways or damaged air sacs, you might be getting less oxygen than what’s ideal. Without enough oxygen, you’ll likely start to feel depleted and low energy, especially if you’re working harder to breathe.

This is so common there’s a term for it: COPD fatigue. Research notes that even in earlier stages, this can be a big problem and is associated with higher risk of hospitalization.

Dr. Kaiser adds that low energy often goes along with lower immune function. So if you feel like you “catch everything” in terms of colds and infections, that may be a sign there’s more going on than what a good night’s sleep can fix.

Shortness of breath can be common when you’re ramping up a workout routine, but if any activity (like mild exercise or walking up a flight of stairs) makes you feel like you can’t catch your breath, that could be an early sign of COPD, Ayoub says. You may find yourself scaling back on your everyday activity without realizing it, she adds.

“Over time, you just get less and less mobile, maybe in subtle ways,” she says. You might not run as many errands as you planned, and you do more online shopping instead. Or you watch your grandkids play instead of joining them, and chalk it up to getting older.

“Basically, moving more makes you feel uncomfortable,” Ayoub says. Keep in mind that shortness of breath can also be a sign of heart issues, so that’s another reason to get it checked out.

As your lungs attempt to counteract what’s happening in the airways, you’ll produce more mucus, and that will usually lead to a “wet cough,” Dr. Kaiser says. In the early stages, it might present as simply needing to clear your throat more often or feeling like your throat is coated, but if you have COPD, it will start to worsen over time.

When all of these symptoms start to combine—the wheezing, coughing, shortness of breath, tightness, and mucus—it could be an indication something is going on with your respiratory system that needs attention. The sooner you know what’s happening, the better your treatment options will be, Dr. Kaiser says, especially with a potentially chronic condition like COPD.