The benefits of quitting restrictive eating once and for all may surprise you. 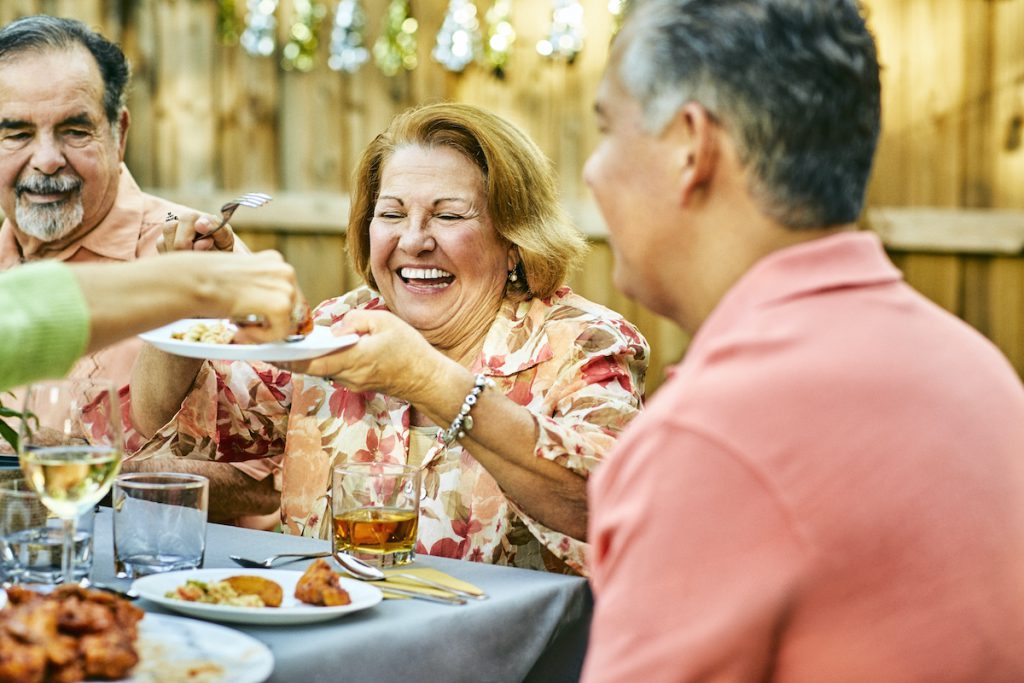 For many older adults, dieting has been a lifelong companion. A November 2020 report from the U.S. Centers for Disease Control and Prevention shows more Americans are actively trying to lose weight today than they were a decade ago. And people 60 and older diet even more than other groups. Almost one in five middle-aged women has recently been on a weight loss diet, according to the report.

A 2020 meta-analysis published in the British Medical Journal looked at the 14 most popular weight loss plans and found that though dieters were somewhat trimmer at the six-month mark, the vast majority of any weight lost was regained in one year.

The good news is that strict diets aren’t the only path to a healthier, happier life. Over the past several years, a body-positive and anti-diet movement has gained traction in part because of the evidence that diets don’t work. In fact, there are plenty of possible benefits—in terms of both physical and mental health—from quitting diets cold turkey.

We talked to registered dietitians Dima Salhoobi, R.D., owner of Fresh Nutrition Counseling in Yonkers, New York, and Su-Nui Escobar, R.D., a Miami-based spokesperson for the Academy of Nutrition and Dietetics, to learn what may happen when you give up dieting for good and why it can be worth it.

1. You May Discover Intuitive Eating

One alternative to dieting is known as intuitive eating. Instead of rules and restrictions, intuitive eating provides a broad framework known as the 10 principles to guide your approach to food.

“It’s a great alternative to dieting because it reduces stress and it’s sustainable for a lifetime,” says Salhoobi, who frequently guides people through the transition from yo-yo dieting to intuitive eating in her practice. Escobar agrees: “I think about nutrition in terms of sustainable, long-term changes. Diets are not sustainable. Intuitive eating is.”

The mother of all anti-diets, embracing intuitive eating means no food is off-limits. It does encourage good nutrition, heeding hunger and fullness cues, and making choices based on how foods make you feel.

You can read up on the basics of intuitive eating here.

A 2018 study in the journal Eating Behavior suggests dieting activities like weighing yourself and counting calories worsened obsessive and disordered eating in college students. And it’s likely that even those without eating disorders will benefit in a similar way, according to Escobar and Salhoobi.

If you are used to tracking every bite you eat in an app or avoiding any one food group or macronutrient (like carbohydrates), dropping the mentally draining scorekeeping involved with dieting can free up brain space. You may find free time you never knew you had.

Escobar gives this example, which she’s seen play out in her clients many times. “Let’s say you go out to dinner and there’s pizza. You resist the pizza and eat only a salad. Now all you can think about is pizza until two hours later when you’re at home, and you overeat.”

When people quit dieting, she explains that the following scenario is more likely: “You have one slice of pizza and some salad, and then you don’t think about it anymore.”

3. You Could Get Good at Listening to Your Body

When you’re following a diet, the diet is the boss. “Dieting is all about telling you what to eat and when to eat it. You bypass anything your body is telling you. When you diet long enough, you can stop noticing your body’s signals altogether,” says Escobar.

When you quit dieting, you’ll need to tune in to what your body really wants and needs. In time, you’ll get more sensitive to your hunger and fullness cues, which can help you naturally find a healthy weight you can maintain long term without any restrictions or rules.

4. You May Do Less Emotional Eating

“When you’re restricting and you can’t eat what you want it creates a lot of negative emotions,” says Escobar. But as diets and forbidden foods fade into the past, meals and snacks can lose their powerful emotional charge.

When you’re free to enjoy a bowl of ice cream whenever you want, your first reaction to an upsetting event may no longer be eating it out of the container in front of the open freezer. “That’s food freedom,” says Escobar.

As your relationship with food and eating become more peaceful, you may find new ways to soothe your feelings, like going for a walk or talking to a friend. You may also decide that you want to eat certain things for comfort sometimes—and do so mindfully.

When dieting, it might seem like the foods you crave most are the ones you aren’t allowed to have. But when you give yourself permission to freely enjoy anything, you get a truer sense of what you’re really craving.

You may be surprised to find out what you crave sometimes is vegetables. In fact, a 2021 study published in the Journal of Nutrition Education and Behavior found that non-dieters (people following the intuitive eating framework) ate about half a serving more produce a day than other adults.

“Dieting warps your cravings,” says Salhoobi. She’s noticed that people on low-carb diets tend to strongly crave the pasta and bagels they’ve been denying themselves. “When you remove restrictions, very often healthy cravings emerge,” she notes.

6. You May Gain Control

Dieting can fill you with guilt. On the flip side, quitting dieting often eases all the guilt and shame that comes with cheating on a restrictive plan. This can actually translate into a feeling of greater control when it comes to food. A 2019 study published in the journal Eating Behaviors found that feelings of guilt and shame around weight and food increased binge eating in college students.

“When people stop dieting, it can be a rollercoaster,” says Escobar. “In the beginning, many people don’t know what to do. And sometimes they’ll eat too many cookies just because their ‘allowed.’ But over time, this usually regulates and they feel much more in control around all kinds of food. Intuitive eaters often find themselves satisfied with less.”

7. Your Weight May Change

Contrary to their fears, many people find they actually lose weight over time as they leave restrictive diets in the past, according to Salhoobi. “When people come to me for intuitive eating, they slowly connect the dots on their own and weight loss starts happening. When we take the stress out of eating, it makes choosing healthier foods easier,” says Salhoobi.

Some people, especially those who have a long history of restrictive eating, may find they gain a bit, according to Escobar. And others find that their weight remains pretty much the same, but other things change for the better. “Sometimes people don’t lose weight with an intuitive eating approach, but they do have more energy, better mental health, or their blood glucose is better controlled,” says Escobar. She believes that’s because when you give up restrictive diets you end up eating a wider variety of foods and nourish yourself better.

There’s a widespread conflation of weight and health in popular culture and even in some doctor’s offices. Salhoobi would like to see the myth that weight loss automatically equals health busted once and for all. “You can get healthier at every size. You can have perfect blood work in a large body and health problems in a smaller body,” she says.

There’s not as much evidence as you might think that weight loss will itself will automatically make you healthy. One study published in the journal Social and Personality Psychology Compass looked at whether diets improved cholesterol, triglycerides, systolic and diastolic blood pressure, and fasting blood glucose and found only “minimal improvements” in these health outcomes.

You can, however, improve your health without losing weight. Focusing on other health metrics instead can be less stressful and more productive than worrying about a scale over which you have little control. Whether your goals are reversing prediabetes, lowering blood pressure, cutting cholesterol, or something else, there are positive steps you can take that have nothing to do with your weight.

9. Your Self-esteem May Get a Boost

One major upside of being an ex-dieter is that you’re likely to start feeling better about yourself. A 2019 meta-analysis of 97 previous studies published in the International Journal of Eating Disorders found that intuitive eating was associated with better body image, higher self-esteem, and greater feelings of overall well-being.

10. You May Inspire Others

When you quit diets, you can lead by example and show others in your life that there’s another way. “Quitting dieting will make you feel freer and it will touch the people around you. Your kids and grandkids see you modeling good eating behaviors,” says Escobar. “It is possible to choose healthy foods without any restrictions whatsoever.”