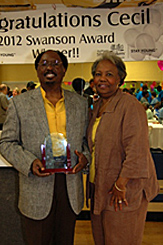 Cecil Daniels was “bored” and “burned out with what had become a monotonous activity” – walking and running around his neighborhood. So he just gave up and started frequenting the local barbershop, where for hours each day he and his buddies would sit, talk and order greasy foods. Then a phone call from a friend led to conversations with other friends about how their lives had changed since retirement, which led to Cecil’s promising to join them at the gym three days a week for SilverSneakers. He joined SilverSneakers and hasn’t looked back. More than three years later, he attends five days a week and says SilverSneakers “provides something special and motivational for me.”