A food that was crucial to human evolution is now routinely disparaged for being high in carbs. But are potatoes really bad for you? 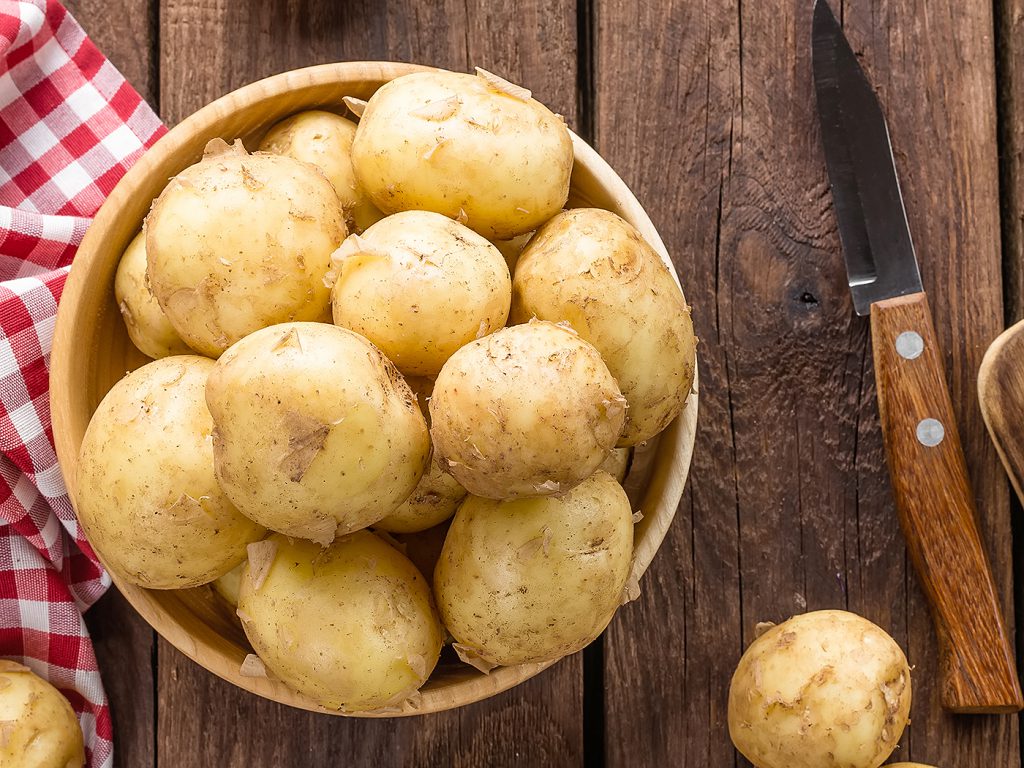 In human history, few foods have played a bigger role than the lowly potato. Some anthropologists believe tubers—vegetables growing wild and easily dug out of the ground—may have been the original brain food, in the sense that they provided our ancient ancestors with a consistent source of calories, which allowed the rapid brain growth that occurred around the time humans mastered fire and learned to cook with it.

So it makes sense that Stephan Guyenet, Ph.D., author of The Hungry Brain, is such a big fan. He and his wife recently harvested 1,500 pounds of potatoes from a garden they share with another couple. That leaves them with 375 pounds per person, or about nine times the U.S. average of 42 pounds of fresh potatoes per year.

“They’re nearly nutritionally complete,” he says, noting that several populations have thrived on diets consisting of potatoes and little else. That includes civilizations in the Andes, where potatoes were first cultivated between 7,000 and 10,000 years ago, and in pre-famine Ireland during the early 19th century, where the people were remarkably healthy and fertile despite crushing poverty.

But if you’ve heard anything about potatoes recently, it probably wasn’t about how healthy they are. They’re shunned by those on low-carb diets, either by choice or for medical reasons, and the paleo community has disparaged them for years.

The most important question, though, is whether potatoes are a good idea for you. Are they a good choice after your favorite gym workout or SilverSneakers class? For weight management? For overall health?

The Argument Against Potatoes

The average American actually eats 128 pounds of potatoes a year, according to the U.S. Department of Agriculture—but only a third of those are fresh: baked, boiled, or otherwise unprocessed. The rest are usually consumed as French fries or potato chips. And those are unequivocally bad for you.

A 2017 report in the American Journal of Clinical Nutrition found that eating fried potatoes two to three times a week was linked to double the risk of dying from any cause during the eight-year study. Other research has linked French fries to obesity and diabetes.

Of course, you already knew that chips and fries aren’t a healthy choice. But why do fresh potatoes have such a bad reputation?

“People tend to view potatoes as unhealthy because they have a high glycemic index,” Guyenet says. “In other words, they cause a faster and larger rise in blood glucose [blood sugar] level than most other foods. Because of this, they also provoke a larger release of the hormone insulin,” which regulates blood sugar.

People with diabetes or prediabetes—whose bodies don’t produce enough insulin or can’t use insulin properly—generally want to avoid big spikes in blood sugar. And because potatoes are high in carbohydrates, they’re shunned by anyone on a low-carb diet.

“I think people also intuitively assume that most potatoes aren’t nutritious because their flesh is white,” Guyenet adds. “We associate the color with refined, nutrient-poor, unhealthy foods,” like sugar and white flour. That’s why many who aren’t concerned about the carbs believe that sweet potatoes—a different and only distantly related plant species—are a much healthier choice.

There’s no question that sweet potatoes have a boatload of vitamin A and beta-carotene, the latter of which gives them their red-orange color. White potatoes have neither in any meaningful quantity.

The Argument for Potatoes

Here are the basic stats for a medium baked potato with skin:

They provide a wide range of vitamins and minerals, including these percentages of the recommended daily value:

That’s more potassium than you get in a banana, and more vitamin C than you find in an apple, a peach, or a cup of blueberries. You’ll also get a variety of phytonutrients—plant compounds that offer important health benefits.

While there isn’t a lot of protein in potatoes, what’s there is complete, meaning it has all nine of the essential amino acids, “a distinction not shared by grains, vegetables, or most beans,” Guyenet says.

A lot of us assume that foods with a high glycemic index are inherently bad for all of us, even if we don’t have diabetes or prediabetes. But Guyenet says that’s not true. “Blood glucose and insulin are supposed to spike when we eat a mixed meal,” he explains. “That’s part of the body’s normal response to food.”

If you have diabetes or prediabetes, talk to your doctor about a healthy eating plan to help you manage blood sugar. Potatoes can be part of a healthy diet, according to the American Diabetes Association, but you’ll want to stick to healthy preparations and portions.

Interestingly, potatoes are also highly satiating. That is, they help you feel full faster and stay full longer between meals. So while the energy from a potato is readily available to you—that’s why your blood sugar spikes—it’ll be a while before you feel hungry again.

That’s just one of the reasons why potatoes are a good choice for someone who’s focused on weight control. Another is their low energy density; because they’re almost 80 percent water, they make your stomach feel full with relatively few total calories.

Plus, they’re a “low-reward” food, which means a potato fills you up without stimulating your appetite.

In The Hungry Brain, Guyenet explains that low-reward foods—a category that includes fruits, vegetables, and fresh meat and seafood—tend to be simple and minimally processed. At the opposite end of the reward spectrum are desserts, snack foods, and entrees with lots of added sugar, fat, or salt. Somewhere in between are flour-based foods like bread and crackers. Even if they’re made from whole grains, Guyenet notes, they tend to have high energy density with low satiety.

Finally, potatoes are a good source of energy to fuel exercise or recover from it—as long as you’re not intensely training for, say, an endurance event. “If you’re working hard every day, you may not be able to replenish your energy reserves effectively,” Guyenet says. “You might want to seek more calorie-dense foods.”

But for the average older adult who exercises a few times a week, they may be just the thing to give your body a pre- or post-workout boost. Potato smoothie, anyone?