Proponents of IV vitamin therapy say it cures everything from anxiety and depression to headaches and the common cold. But does it really work? Here’s what you need to know. 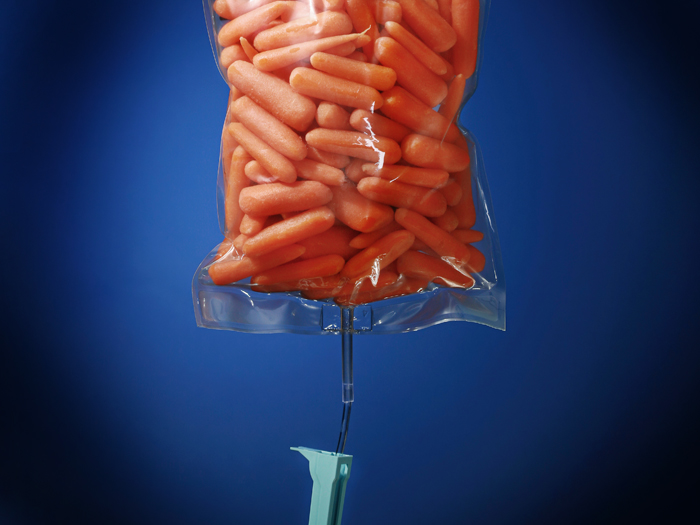 Overindulged at a party last night? Feel a cold coming on? Stressed out by life in general? There’s an IV drip for that.

Previously a celebrity wellness trend, intravenous (IV) vitamin therapy has gone fully mass market in recent years. The promises seem pretty grand, so we took a look at what you’re really getting when you head to a vitamin clinic and hand over your hard-earned money.

Here’s everything you need to know before you even consider making an appointment.

What Exactly Is IV Therapy?

In general, many different liquids can be delivered intravenously, or through the veins via an IV drip in the arm. This can include fluids, medications, or blood that need to be administered quickly in a medical emergency, such as heat stroke or severe dehydration.

IV vitamin therapy, specifically, traces its roots back to the 1960s and a Baltimore physician named John Myers, according to a report in Alternative Medicine Review. Myers developed a mixture of vitamins and minerals to help patients suffering from a variety of chronic conditions. Instead of popping a pill, patients received it by IV drip so the medicine went directly into the bloodstream, bypassing the digestive system and doing its work quickly.

The mixture became known as the Myers Cocktail, and Dr. Myers used it to treat everything from asthma attacks to allergies to migraines. Administered at his medical office under the supervision of doctors and nurses, the cocktail seemed to help patients feel better with minimal negative side effects. Though it lacked rigorous scientific studies, anecdotes from many satisfied patients testified to its effectiveness, and the treatment grew in popularity.

Fast-forward to the early 2000s. Other doctors had taken the original Myers Cocktail formula and tinkered with it, creating treatments for even more conditions. In theory, they delivered a high concentration of vitamins, minerals, and amino acids directly to the body’s cells. There was still no science to back it up, but celebrities around the world began hearing about IV therapy and trying it out for themselves.

Soon, enterprising physicians were opening up clinics at medical spas, malls, and even mobile vans. The biggest draw: the IV hangover cure.

Now there are drips designed to boost your energy, brighten your skin, ease anxiety, and shorten recovery time after a marathon.

“I have no idea, and neither does anyone else,” says David Katz, M.D., M.P.H., director of the Yale-Griffin Prevention Research Center in New Haven, Connecticut.

“There’s no science behind it,” he continues. “No evidence that you’ll get colds or flu less often, or recover better from a hangover. As a scientist, the only honest answer is to say, ‘Who knows?’ And when you don’t know, it’s best to be cautious.”

Dr. Katz and his team at Yale were cautious. They conducted a study to examine how effective the IV drip was for treating fibromyalgia, a condition that causes chronic pain in muscles and joints.

Because there are few options for treating fibromyalgia pain, Dr. Katz offers the IV drip at his clinic.

“A patient might come to us and say, ‘I’ve tried everything—what else have you got?’” he says. “So, we might try the Myers Cocktail under appropriate sterile conditions, and it might give the patient some relief.”

Other doctors report some success in specific medical situations.

“It’s definitely not something we give to patients blindly,” says Jonathan Hickson, M.D., a physician at the George Washington University Center for Integrative Medicine in Washington, D.C. “But sometimes it can be helpful.”

For example, Dr. Hickson might use IV therapy to treat a cancer patient who isn’t using nutrients effectively. “But if you’re generally healthy and well hydrated, you don’t need an IV infusion,” he says.

The Federal Trade Commission agrees. In September 2018, it charged a chain of IV drip bars with “making a range of deceptive and unsupported health claims.”

What Are the Risks?

When administered properly, the dangers to your health are minimal, Dr. Katz says.

“In responsible hands, the risks are quite small. But anytime you poke a hole in somebody’s skin, there’s a chance of bleeding, bruising, clotting, or infection,” he says. “And a few people have acute reactions to B vitamins when they’re injected.”

His advice: No matter how small the risk, if there isn’t a potential benefit, you shouldn’t do it.

Plus, one of the biggest risks may be to your bank account. IV therapy costs about $100 or more per drip, depending on the formulation and facility. Certain treatments at an IV lounge can cost up to $1,000.

If you have a serious medical condition, see your doctor, who might decide you need an IV drip—or a different treatment—to address your illness. But stay away from the IV lounge at the mall.

“If you want more energy, try exercise,” Dr. Katz says. “And the best way to treat a hangover is to avoid getting one in the first place—but if you do, just drink lots of water.”

There’s no need to pay good money for an IV hangover cure. “There’s a part of our body specifically designed for taking in fluids,” Dr. Katz says. “And it isn’t our veins.”