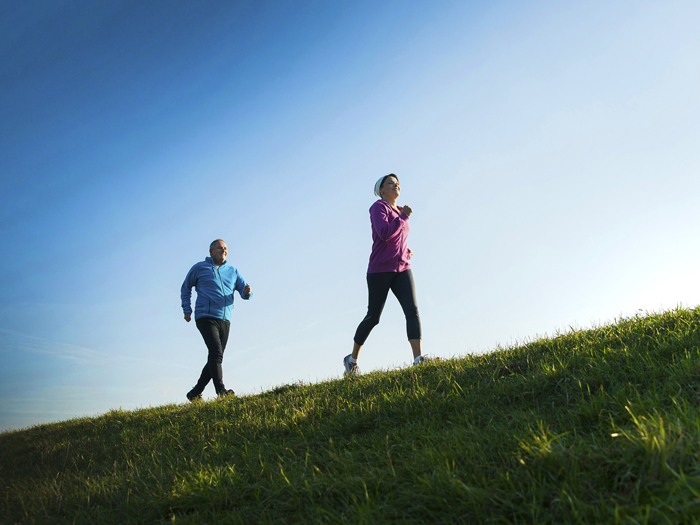 Regular aerobic exercise triggers all sorts of under-the-radar biochemical changes that together whip us into great physical shape. Over time, for instance, we sprout new blood vessels to supply extra oxygen and nutrients to working muscles. Mitochondria, the metabolic furnaces within our cells, increase in number, allowing our muscles to more efficiently burn fat for fuel. Perhaps best of all, “sarcopenia of aging”—the natural tendency to lose muscle mass with advancing years—slows dramatically. Think Fountain of Youth Lite.

For years now, researchers have investigated one particular biochemical superhero thought to play a key role in all of these beneficial changes. It’s called peroxisome proliferator-activated receptor gamma coactivator 1-alpha—or PGC-1alpha for short—and it sets these cascading physiological upgrades into motion.

Over the past several years, researchers at Sweden’s famed Karolinska Institute have identified yet another benefit of exercise-induced PGC-1alpha, one that might just be its best yet: PGC-1alpha can also upgrade our emotional resilience, slashing vulnerability to stress-related anxiety, depression, and other mood disorders.

The Emotional Perks of Exercise

What hasn’t been so clear, Clark adds, is how exactly exercise helps. Traditional explanations have focused largely on psychosocial effects: improved self-esteem from losing weight and looking buff, the camaraderie and social support of workout buddies, and even a potential placebo effect in those who simply believe exercise makes them feel better.

With few exceptions—notably, the so-called runner’s high triggered by endorphins—the biological mechanisms behind exercise’s emotional boost have proven more elusive. “When we first began our study,” says Karolinska physiologist Jorge Ruas, Ph.D., “we thought we might find that well-trained muscles produce a substance with beneficial effects inside the brain.”

What he and his colleagues discovered instead was a different route to the same destination. Rather than unearthing a “feel-good” chemical that lifts our mood, they discovered that superhero compound PGC-1alpha blocks a “feel-bad” compound produced by stress and stops this from making us miserable in the first place.

How Exercise Blocks a Feel-Bad Chemical

The feel-bad compound in question is called kynurenine, or KYN for short, an inflammatory substance released by the liver, kidneys, and immune cells. During times of high stress, levels of KYN soar in the bloodstream. In fact, people with stress-induced depression have such high levels that some experts consider it a marker for the disease.

How exactly KYN works its magic on our spirits is not completely understood, but researchers suspect it inflames brain cells in ways that heighten vulnerability to depression. To do so, however, KYN must enter the brain first. Many compounds are blocked from such entry by the blood-brain barrier, a natural barricade to various neurological toxins. Unfortunately, thanks to a compact molecular structure, KYN has no problem slipping through.

If only there were some kind of natural blues blocker capable of keeping KYN out of our noggins in the first place.

In pioneering research published in the journal Cell, the Karolinska researchers reported this is exactly what PGC-1alpha does: It subtly changes KYN’s chemical structure into a form that can no longer breach the blood-brain barrier. In other words, by stopping the bad guy at the moat, PGC-1alpha prevents KYN from ransacking the cranial castle.

Ruas and his colleagues showed this through a series of experiments with lab mice. In rodents and people alike, there are two easy methods to jack up KYN levels: inject them with KYN directly, or bombard them with high levels of stress that stimulates their bodies into releasing it naturally.

Regardless of method used, once KYN levels have soared, both the injected and high-stressed mice quickly began showing depression-like behavioral changes along with brain inflammation. To see if PGC-1alpha might counteract these, the researchers next turned to transgenic mice specially bred to produce high levels of PGC-1alpha. Just as with normal mice, injections and stress still caused KYN levels to soar in their bloodstreams. What didn’t happen, however, were any of the subsequent depressive behaviors and brain inflammation that their genetically normal peers had experienced.

“It was one of our most striking findings,” explains Maria Lindskog, Ph.D., senior researcher in the department of neurobiology at Karolinska. Thanks to naturally high levels of PGC-1apha, KYN couldn’t penetrate their brains, and no amount of stress could make them act depressed.

But here’s the kicker: Normal mice, too, could provide themselves with the same protection from stress as their genetically enhanced comrades. All they needed to do was run—something that mice actually love to do. Once the researchers introduced exercise wheels into their cages, even highly stressed mice began averaging 2.5 miles of running per night. After 8 weeks, their PGC-1alpha levels had risen so high that all signs of depressive behavior and brain inflammation had disappeared. This was true even when the stressors remained.

Do This to Exercise Your Blues Away

The same approach, says Ruas, can work for people, too—provided we keep exercising on a regular basis. Running, swimming, biking, and even power walking are among the kinds of aerobic exercise that have the best track record for protecting us against stress.

“Keep in mind that PGC-1alpha is activated when your muscles must adapt to higher levels of performance,” Ruas adds. In other words, don’t start slacking. Keep challenging yourself, and both your body and your brain will see major benefits.

What if you’ve been diagnosed with depression? Continue to follow your doctor’s treatment plan, and look for ways to get more active. Exercise is part of a healthy lifestyle and can help reduce depression symptoms.