Don’t let cold weather send you into an itching, scratching frenzy. Find relief with these strategies. 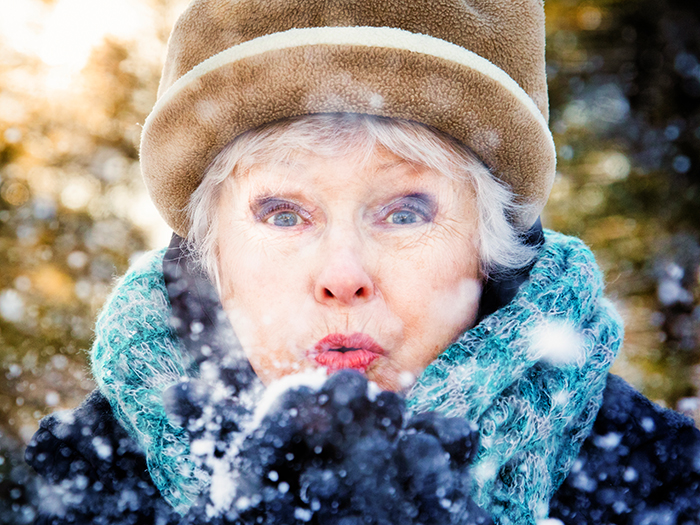 Forget dropping temps and blustery forecasts. You know it’s winter when your skin starts to dry, chap, itch, and turn red. The misery is even worse for anyone who’s prone to eczema.

Just ask Lisa Choy, who’s lived with atopic dermatitis—the most common form of eczema—since she was seven, and who still has vivid childhood memories of battling the red, itchy patches on the inside of her elbows and behind her knees.

“I remember my mom putting a corticosteroid cream on my body and wrapping me up with Saran Wrap when I was a child,” she recalls.

Choy isn’t alone in her quest for relief. More than 31 million people in the United States have some form of eczema, a dermatologic condition that causes skin to become inflamed.

Now the chair of the National Eczema Association (NEA) board of directors, Choy, who’s in her mid-60s, has met lots of people who have eczema, most of whom have been diagnosed with the condition as a child, but others who developed it in their 50s and 60s.

Beginning in your 50s, there’s a steep drop in the production of collagen and elastin. Not only does your skin take on a new look and feel, but it doesn’t recover as well from things like cold, dry air, says Peter Lio, M.D., an assistant professor of dermatology at Northwestern University Feinberg School of Medicine in Chicago.

Add in the damaging effects of winter—the combination of cold outside air and heated indoor environments—and it’s enough to send anyone with dry skin problems running to the store to buy out the stock of lotions.

The good news: Eczema treatments and remedies for severe dry skin have come a long way since Choy was a child. These five protection strategies will help you make it through the long cold spell—no plastic wrap required.

If your skin doesn’t retain enough water, it can feel dry and itchy. To lock in moisture, the NEA recommends taking at least one long bath or shower a day—anywhere between five and 15 minutes—and applying a moisturizer to your skin within three minutes after you’re done.

But here’s the catch: The temperature needs to be warm, not hot. “Very hot water often feels good on itchy skin, but it comes at the cost of increasing blood flow and thus inflammation,” says Dr. Lio.

Plus, he adds, “it strips away the natural oils, which can result in even drier skin.” One trick that might make a lukewarm shower more palatable is to turn the water all the way up to hot before you get in, allowing the room to get steamy. Then lower the temperature to warm when you’re ready to step in.

Choy takes two daily showers: one in the morning and one at night “to wash off any irritants, like pollen, that I might have picked up during the day,” she says.

It’s also a good idea to pare down your pampering. Stock up on unscented soaps and body washes, as fragrances and dyes can aggravate dry skin. And use a plush washcloth instead of a loofah or shower scrunchie, since those rougher surfaces can irritate your skin even more.

People with eczema have a damaged outer skin barrier, which helps protect against irritants like allergens and bacteria, according to the NEA.

That’s where moisturizer comes in. Moisturizer protects this outer skin barrier by keeping moisture in and irritants out. The more oil the moisturizer contains, the more effective it is at treating eczema.

There are three different types of moisturizers: ointments, creams, and lotions. Ointments and creams tend to contain more oil than lotions, which makes them better choices for people with eczema. But during the day you might like the idea of a fast-absorbing lotion—just keep it handy since you’ll want to apply it several times a day.

When choosing a moisturizer, try to avoid ones that contain lots of ingredients, especially fragrances, which can be a common allergen, says Dr. Lio. “Long lists of botanicals can make it tough to know which one is the culprit of your symptoms.”

One beneficial ingredient to look for is ceramide. It’s a compound that strengthens your skin barrier and helps replace lost moisturizer. And don’t skip sunscreen—you don’t want to have to deal with a sunburn on top of severely dry skin. Continue using an SPF 30 on your face, lips, and any exposed skin.

Whenever you start to feel the itch, apply some moisturizer. “Any time I find myself scratching, I know I need to be applying moisture to my skin instead,” Choy says. She keeps little bottles of moisturizer near her at all times—one in the kitchen, one in her purse, and a few in the bathroom. “This way, I don’t have any excuse not to use it,” she says.

Keep in mind that it isn’t uncommon for a moisturizer to stop working after a period of time, says Julie Block, the president and CEO of the NEA. When that happens, don’t get discouraged—switch to a new moisturizer until you find one that works for you again, she says.

Want to know what lotions and potions the pros recommend? Check out the beauty products dermatologists swear by.

For Choy, the itching can be the worst part of eczema. “Sometimes I scratch myself in my sleep,” she says. If the symptoms of eczema are keeping you up at night, you might want to try wet wrap therapy, which involves soaking a fabric in water and applying it to your skin.

“Wet wraps keep the skin super-moisturized and cool and can make a huge difference for very damaged skin in just a few nights,” says Dr. Lio.

To try it, first apply a moisturizer to your skin, then wet a piece of fabric—either clothing or gauze—in warm water until it’s slightly damp. Then, wrap the fabric around the inflamed areas of your skin and leave it on overnight.

During an eczema flare-up, skin sores can become crusted or “weepy.” When that happens, Dr. Lio recommends applying calamine lotion to the affected area. The mineral zinc in calamine acts as an anti-inflammatory agent that calms the miserably irritated skin.

“It can provide a lot of relief,” he says.

Other options include topical “anti-itch” products or even certain oral antihistamines that have a drowsiness effect, such as diphenhydramine (Benadryl) and chlorpheniramine (Chlor-Trimeton).

“Antihistamines usually aren’t very effective against the itch of eczema, which is not a histamine-related problem,” he explains, “but their sedative effect helps folks sleep, which is actually really important for skin and overall health.”

As always, ask your doctor before taking any new medications, especially if you have a chronic condition or take other prescriptions, over-the-counter drugs, or supplements.

Another thing to keep in mind: You don’t want to use antihistamines as a preventive measure for eczema over the long term, Dr. Lio says.

You can also apply cooling packs to your skin, which can help soothe a severe itch, says Dr. Lio. This could be something as simple as an ice pack wrapped in terry cloth, a cold damp washcloth, or a reusable cooling workout towel.

Skin Saver #5: Ask for a Prescription

When moisturizers aren’t enough, and the itching is painful and keeping you awake at night, it’s time to consult a doctor, says Dr. Lio.

“As things get more severe, we tend to need to lean on prescription-strength products, at least until we can get things cooled down,” he says.

More good news: There are new medications available for people with eczema—even those who think they’ve tried everything, says Block.

“Someone who’s 50 or 70 might have just given up trying to work with their doctor to find solutions,” she says. “Sometimes it’s because they tried a prescribed treatment, but it didn’t work. Or they experienced a rebound effect and a medication stopped working for them.”

While topical steroids continue to be a mainstay of eczema treatment, there are now stronger medications that can help treat people with moderate to severe forms of the condition. One example are immunosuppressants, which are oral or injectable medicines designed to stop the itch-scratch cycle.

Biologics are another new therapy made from genetically engineered proteins and human genes. These are given intravenously to target specific parts of the immune system that trigger inflammation.

Check with your health plan or medicare.gov for coverage information.

The bottom line: Don’t give up! If you itch, there’s probably a fix.