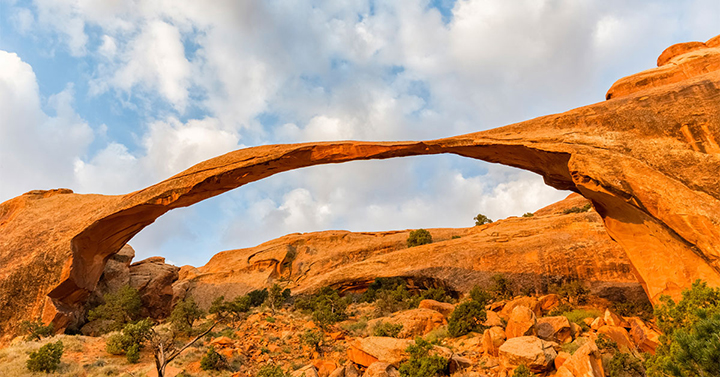 Every year since 1990, America’s Health Rankings has told us which states have the healthiest and least healthy seniors.

The 144-page study examines a variety of behaviors, community and environment factors, clinical care and health policy regarding senior health.

In this article, we highlighted the five best and five worst states for seniors in 2015. Scroll down to see the full ranking of all 50 states.

Utah is the fifth healthiest state for older adults. And in Utah, they are an altruistic bunch. Utah has the highest percentage of volunteerism among seniors.

In the past year, volunteerism in adults aged 65 and older increased 10 percent from 38.6 percent to 42.6 percent. Way to pay it forward, Utah!

Working against the Beehive State is a low percentage of diabetes management and a high shortfall of geriatricians.

The Aloha state ranked fourth this year, boasting a low prevalence of smoking and obesity and the lowest rate of preventable hospitalizations. Unfortunately, Hawaii has the highest prevalence of underweight seniors — people who have a body mass index of 18.5 or lower.

Hawaiians 65 and older have the lowest prevalence of depression among seniors in the nation, at 8.7 percent. (No-brainer! Is there anything to be depressed about in beautiful Hawaii?)

“Depression and depressive symptoms are an outcome of poor health, lack of social support, and disabilities that affect quality of life,” the study asserts. “Depression can impair physical, mental, and social functioning of older adults.”

“Able-bodied seniors” are those without disabilities, physical or mental. Across the nation, over 40 percent of adults 65 and older report some kind of disability that impacts their way of life. (In Minnesota, 68.2 percent of seniors are able-bodied.)

“While some disabilities are largely unavoidable, the extent to which they interfere with a person’s life can be influenced through actions taken at the personal level, such as exercise and the use of special equipment or aids,” the report says.

Not to mention, Minnesota has the fewest poor mental health days.

Minnesota’s challenges include low SNAP enrollment and a low percentage of seniors with a dedicated health care provider.

New Hampshire moved up a slot from third in 2014 to second in 2015. Its strengths include a low percentage of seniors living in poverty and a high percentage of health screenings.

Early detection can save lives

A whopping 91.3 percent of New Hampshirites between the ages of 65 and 74 have had mammograms, colonoscopies and other screens within the recommended time period. Getting screened is important — early detection can save lives.

Challenges in New Hampshire include the lowest prescription drug coverage and a high prevalence of activity-limiting arthritis pain.

“Osteoarthritis, the most common form of arthritis among seniors, is most prevalent in older adults who are overweight or with a history of joint injury. Physical activity can prevent arthritis and improve quality of life for people with the disease,” states the AHR report.

Vermont owes its first place ranking to its high health status, which is the percentage of adults aged 65 and older who report that their health is very good or excellent.

“Health status” is subjective and self-reported, but researchers say it is influenced by a variety of factors that affect overall well-being. Individuals with a high health status have a lower mortality rate than those with a low health status, so Vermonters with a positive outlook on their health are more likely to live longer.

As a nation, 41.8 percent of seniors say their health is very good or excellent. In Vermont, that number is 49.9 percent.

Besides the delicious maple syrup, another of Vermont’s strengths is a low prevalence of smoking.

According to the study, as the nation’s fifth worst state for senior health, Oklahoma is not doing “OK.” That’s because it has a high prevalence of hip fractures among seniors.

Oklahoma also has one of the highest rates of physical inactivity — 42.3 percent of seniors in Oklahoma are physically inactive. That could have something to do with the hip fractures. Physical inactivity can contribute to falls and fractures, and serious injuries like a hip fracture can keep one bed-ridden and inactive for months.

In fact, “a hip fracture may signal the end of independence for many; 1 in 4 previously independent older adults remain in a long-term care facility… as many as 1 in 5 persons with a hip fracture will die within a year of the injury,” states the report.

Physical activity can enhance your immune system and increase your life expectancy. A tip for Oklahomans: Try a group fitness class — it can reduce the risk your risk of falling and improve your balance.

Arkansas, ranked 47th in senior health, is challenged by the highest prevalence of food insecurity and the lowest percentage of health screenings. Luckily, Arkansas has a low prevalence of chronic drinking among seniors.

In Arkansas, one in four adults aged 60 and older is marginally food insecure, facing hunger on a regular basis. Older adults have specific nutritional needs to ensure health and well-being; because of that, food insecurity is a big concern.

“Food insecure older adults have been found to have significantly reduced intakes of vital nutrients compared to food secure older adults, which could have tremendous implications for overall health,” the report says.

The Bluegrass state has the highest rate of preventable hospitalizations in the nation. Kentucky seniors also have a high prevalence of physical inactivity.

Preventable hospitalizations are those that could’ve been avoided with early intervention or good outpatient care. They include chronic obstructive pulmonary disease, bacterial pneumonia and congestive heart failure.

Despite Kentucky’s designation as the home of Bourbon Country, the state’s seniors do not imbibe very much. Seniors in Kentucky have one of the lowest levels of chronic drinking in the country. But unfortunately, Kentuckians have many poor mental health days — nearly three days per month.

Mississippi ranked 49th in this year’s report, up from 50th last year. The reason? Mississippi has the highest percentage of seniors living in poverty in the nation.

The report says: “The effect of poverty in relation to higher rates of many chronic diseases and shorter life expectancy has been well documented. Poverty directly influences an individual’s ability to meet his or her basic needs, including access to health care, availability of healthy foods, and choices for physical activity.”

Mississippi is also home to the highest percentage of seniors with cognitive difficulties.

The study also found that many Mississippians don’t favor the bottle. Mississippi is one of states with the lowest prevalence of chronic drinking among seniors.

The Louisiana cuisine must not be too friendly on its residents’ waistlines. The state has the second highest prevalence of obesity among seniors in the nation.

People who have a body mass index of 30.0 or higher are considered obese.

“Obesity is one of the greatest health threats to the United States. It contributes significantly to a variety of serious diseases, including heart disease, diabetes, stroke, and certain cancers, as well as poor general health,” according to the report.

“Obesity is a leading cause of preventable death, causing an estimated 200,000 deaths annually in the United States.”