Keep these nutritionist-approved items on hand and an easy, healthy meal will always be within reach. 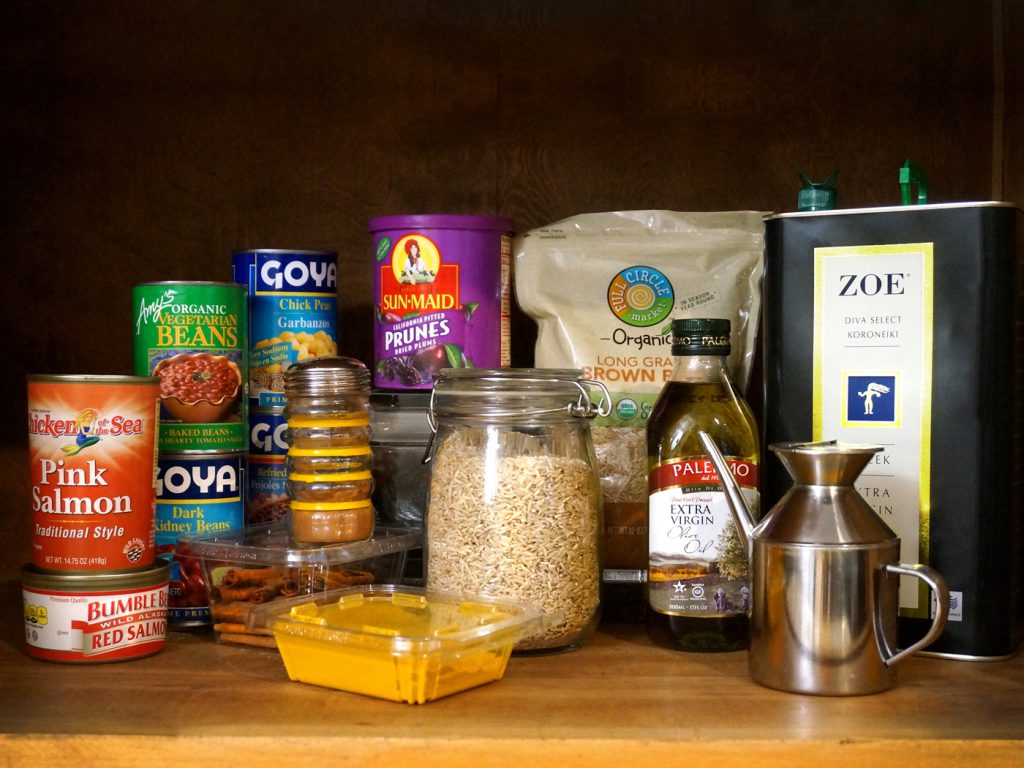 Maintaining a well-stocked pantry is vital if you want to eat healthy. Think about it: When hunger hits, whatever’s in reach is what goes on your plate.

“If you don’t have healthy items on hand, you’re more likely to pick a convenience food, order takeout, or run out for fast food or to a restaurant,” says Nathan Myers, R.D., a clinical dietitian at James J. Peters VA Medical Center and an adjunct professor of clinical nutrition at New York University. “Most restaurant food and convenience foods like frozen meals and the stuff you pop in the microwave generally have a worse nutritional profile than something you might put together yourself, even if it’s something simple.”

Keeping certain staples on hand means you’ll always have a healthy meal at your fingertips. And if you stock smartly, you could be doing your body some big favors. The shelf-stable options below will help you replenish after your favorite gym workout or SilverSneakers class. And they’ll deliver some surprising health benefits, including reduced risk of heart disease, healthier blood sugar, and natural pain relief.

Open up your pantry. If these foods aren’t there for the taking, it’s time to go grocery shopping.

The type—garbanzo, black, or pinto, for instance—is up to your taste buds. They can all add heft to any soup or salad, says Kristin Willard, R.D.N., a dietitian who specializes in senior nutrition in Chico, California.

Canned beans are not only affordable and versatile, but they’re also nutritional powerhouses with disease-fighting antioxidants and plenty of vitamins and minerals. Best of all, a ½-cup serving of cooked black beans has 7 grams of protein and 8 grams of fiber.

Why that’s good: The combo of fiber and protein helps the glucose (sugar) from the starch of the beans to be slowly released into the bloodstream. While simple carbs—including processed foods like cookies, cereal, and refined grains—release sugar into the bloodstream very quickly, beans keep you full for a long time and help control blood sugar levels.

Choose a can that has “low sodium” on the label, and rinse them before you serve, Willard says. A study in the Journal of Culinary Science and Technology found that draining and rinsing canned beans can cut their sodium content by 41 percent.

This yellow-orange spice has long been a staple in Indian dishes like curries, but it’s just as tasty if you sprinkle it on your scrambled eggs or cooked vegetables, Willard says. It’ll do your body good too. Turmeric has anti-inflammatory properties—thanks to an active component called curcumin—which makes it helpful for relieving joint pain caused by arthritis, she says.

A 2014 Japanese study found that when people with knee arthritis were given high-dose capsules of curcumin (180 mg) every day for eight weeks, they experienced a significant reduction in knee pain and were less dependent on NSAIDs than those given a placebo. The researchers believe that curcumin may suppress the activity of compounds in your body called prostaglandins, which are key to sparking the inflammatory process.

Keep a few cans of salmon on hand for when you want a quick and easy meal that’s high in protein and low on prep, Willard says. One 3-ounce can of pink salmon packs about 17 grams of protein.

Try folding some salmon into your omelet for breakfast, or grill up some salmon burgers for lunch or dinner. According to a new study in the American Journal of Clinical Nutrition, older adults who eat protein-rich meals throughout the day—instead of trying to cram the majority in at once—tend to maintain more muscle mass and strength as they age.

Salmon is also high in omega-3 fats, which may help lower blood pressure by reducing levels of LDL (often called “bad”) cholesterol, Myers says. Canned tuna—pick chunk light instead of albacore, which can be higher in mercury—works too, but salmon comes with an added hit of calcium, Willard says. Credit that to the tiny bones in salmon, which most people can safely eat.

Prunes have the reputation as nature’s cure for constipation—and for a good reason. “They’ll really get your digestive system moving to keep you regular,” Willard says.

They may even work better than fiber supplements. A study from the University of Iowa Hospitals and Clinics found that people who ate 100 grams of prunes per day—or about 12 prunes, totaling 6 grams of fiber—experienced more bowel movements per week and had better stool consistency than those who took psyllium, a type of fiber used primarily as a gentle bulk-forming laxative in products like Metamucil. The researchers believe this is due to the fruit’s powerful combination of fiber, antioxidants, and the sugar alcohol sorbitol.

But prunes do more than rev up your digestive system. They’re also high in vitamin K, which helps keep your bones strong, Willard says. “Combine them with some sort of protein—prunes and nuts, maybe—to make you feel more satisfied,” she suggests. Sprinkling them on top of yogurt works too.

Another good reason to stock up: Eating more whole grains may reduce the risk of premature death, according to an analysis by researchers from Harvard T.H. Chan School of Public Health. The study found that people who ate four servings of whole grains per day (about 70 grams total) were 22 percent less likely to die early from any cause than those who ate little or no whole grains.

Make a big batch of brown rice on Sunday, and use it in a variety of healthy meals throughout the week. Need some ideas? Try Tex-Mex Chicken and Rice.

No healthy pantry is complete without extra virgin olive oil (EVOO). It’s a quick and easy source of monounsaturated fatty acids, known as healthy fats. In fact, diets that include EVOO, including the famous Mediterranean and MIND diets, are associated with lower rates of heart disease, dementia, and certain types of cancer.

For maximum benefits, look for a bottle indicating that the oil is extra virgin (not virgin or “light”) and ideally cold-pressed or expeller-pressed. A dark bottle—green or black, for example—protects the oil from oxidation and becoming rancid. And EVOO is best eaten cold or at room temperature so it’s ideal for drizzling onto foods or spritzing onto salads.

Even though it’s a healthy food, keep in mind that olive oil can be high in calories, so stick to sensible portions.

Cinnamon’s naturally sweet flavor makes it a fantastic substitute for sugar in coffee, smoothies, oatmeal, popcorn, and just about anything else. How about that for an easy way to cut back on calories and manage your weight?

In addition, studies show cinnamon could help keep blood sugar steady and alleviate symptoms of diabetes. Plus, one small jar lasts a surprisingly long time so you won’t need to restock often.

While cinnamon’s versatility is hard to beat, it’s not the only spice worth keeping on hand. Check out these easy-to-use herbs and spices that upgrade any meal—without adding salt.